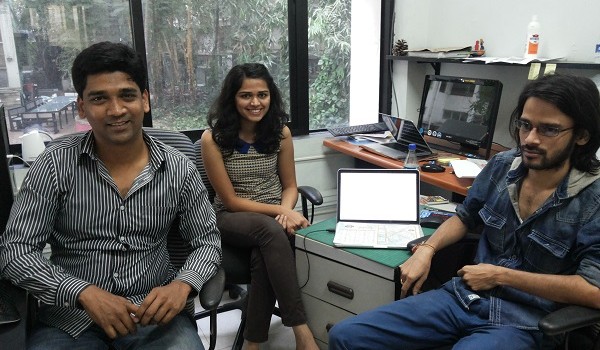 It is easier for a newcomer in Mumbai to lose his way than find it, says Jaikishan Patel (26), a first year student of Visual Communication at Industrial Design Centre, IIT-B, Powai. Says the Chhatisgarh native, “I first came to Mumbai in 2010, and I was thoroughly confused by the three suburban rail routes – Western, Central and Harbour. Now I have been here since last year, and I still find them confusing! Nothing has changed at all.”

This thought was uppermost in his mind when he and a fellow student of their 12-student class, Snehal Patil (24), opted to map Mumbai’s local train network. Jaikishan (extreme right in pic above) says, “It is easy for people to lose their way on railway stations, particularly on the Harbour Line. There are no signages, activity and movement patterns are not planned. People get from one spot to another by asking others for directions. Even the indicators on Western line are different from the Central line. This is not ideal for a rail network that is probably busier than the Indian Railway network.”

Adds Snehal, “Though I stay at Thane, and I know all the lines and stations, I still get confused. The existing rail maps are very badly designed. That’s why both Jaiki and I opted to design an easy rail map for Mumbai residents.” The duo started working on their project five weeks ago, and started by studying the main junction stations such as Kurla and Dadar. “We found that the only maps that do exist are to be found next to ticket windows, and even these are ticket fare guidelines. Other than these, we went on the Internet to look up the existing routes and for exact names and chronology of stations.” 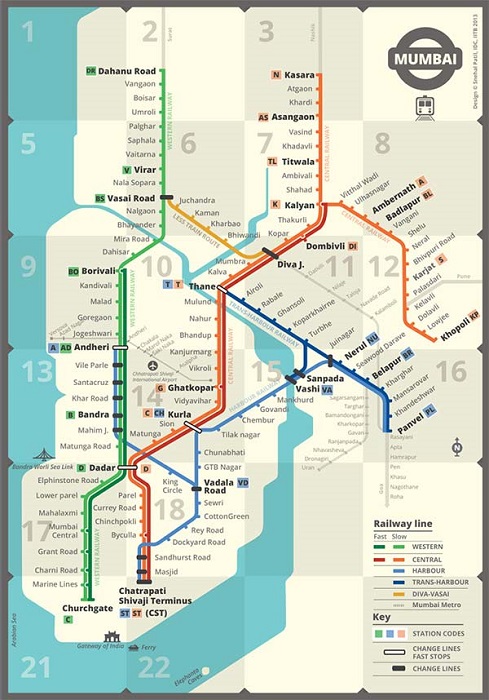 The map is now ready and very easy to navigate – three steps help you locate the station you want. 1) Select the desired station from an alphabetical list with a corresponding box number. The map is divided into a grid of 22 squares, and each square carries a box number. 2) See the box number (of the selected station) on the list and locate that number on the grid. 3) Your station can be located in the square marked with that particular box number on the grid.

The box number is also tagged with a line and station code for easier route navigation and understanding. Besides this, there is a simple legend that explains the colours and the icons used.

This is not the first time that IIT-B students have toyed with redesign for the Railways – last year, student Deepali Karanjavkar came up with a standardised design for railway indicators, using the Devnagari font. Deepali also developed the font for the easy-to-read LED indicator after testing it for sizes and spacing. Sadly, the proposal never took off.

How the map took shape

After a fair amount of legwork and Googling existing rail routes, the rail map began to emerge. “The most challenging aspect was putting the grid together. I started with a linear diagram at first, while Jaikishan worked on another map,” Snehal says, adding that the maps were later merged to form a single map.

Three weeks later, the first draft of the map was ready. “We decided to put the map out for people to study and give feedback on,” says Mandar Rane (extreme left in pic above), the duo’s professor who is helping shape their project. “After the initial mapping, tracks were added. Colour demarcations were made for fast and slow trains. Some people wrote to us pointing out locations where the tracks merged with Indian Railways. The idea was to simplify the map, but not to the extent that details would be lost,” Mandar says.

At first, there was a barrage of feedback on the map, with several people suggesting corrections. “Now, we receive about 12 emails a day. We need a reliable source to authenticate the feedback,” Mandar says. He remarks that the map should ideally be viewed by the Railway authorities before it is finalised. “The Central Railway has shown an interest in looking at it, but we are yet to hear from Western Railway,” he reveals.

Crowdsourcing helped in correcting the design. “We have made about 30 revisions to the map already,” Snehal says. “After launching the map, too, there have been about 10 revisions.”

The trio will freeze the design at some point, but “if there is a mistake, we have to correct it,” Mandar says. “We want this map to reach the users of Mumbai railway, so that their commute becomes easier. If you understand the network, your travel turns out better,” Jaikishan says.

The point of the whole exercise, Mandar says, is to make the travel model clearer. “After seeing the map, one man wrote to me saying, ‘Now I know how my daughter travels to Vashi!’ We want the map to reach people, ideally as a permanent display at stations. If not, it should be available in a portable form so that it can be folded and put away in a wallet or purse,” he explains, adding that they are toying with the idea of creating an app that will cover the gamut of rail travel in Mumbai.

The map, at this stage, only needs endorsement and support from the Railways. “It is ready, it needs to be reviewed, and then it needs to be installed. It is a very clear model, actually – any corporate would be happy to sponsor it. It’s a win-win for all concerned,” Mandar signs off.

If you have suggestions to make about the map, write to idcrailmapfeedback@gmail.com. View the map on mrane.com/railmap.php

One Response to How the Mumbai Rail Map was conceived