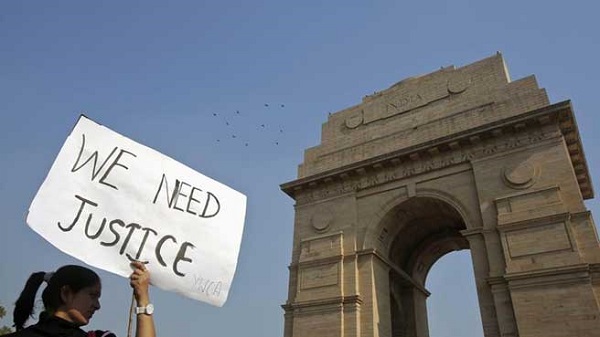 Citizens fight back against injustice

The days of people quietly accepting atrocities by the State are long gone – now they’re combating injustice with information.

Last week, Russian President Vladimir Putin and his wife, Lyudmila, made a rather dignified announcement, which put a formal end to their marriage. It was known before the announcement, that the two were rarely together, and that they had been dragging the marriage along for years.

What impressed me was the manner in which the announcement was made. The couple is middle-aged, yet they didn’t let their age come in the way of their decision. To part at 60 cannot be easy.

Just pause and think of how we, in India, rarely take this step at age 60 and beyond, preferring to keep up the sham. We pretend everything’s fine, we are comfortable portraying a reality that doesn’t exist. We can keep up the pretence for years. That’s just who we are.

And because we are so happy propagating a private lie, we are happy lying in the public sphere as well. Even as parts of North India are being wrecked by the monsoon, with hundreds being killed in flash floods and landslides, our politicians are doing what they do best – nothing. Political leaders from across the board should currently be a part of the relief operations in affected regions, putting to good use the sarkari and non-sarkari brigades they nurture. But what are they really doing? Conducting aerial tours, sitting far away and giving boring speeches.

Some politicians are otherwise engaged in justifying fake encounter killings or arresting innocents. In Lucknow, activists are protesting outside the UP State Assembly, against the 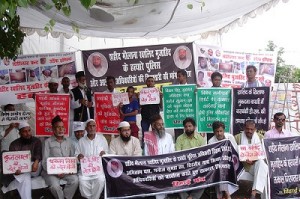 illegal arrest and killing of Khalid Mujahid by the UP cops (see pic on right). But Mulayam and Akhilesh Yadav are choosing to divert attention by distributing computers and laptops!

In Gujarat, where Mumbai-based student Ishrat Jehan who was killed in a fake encounter on the pretext of her part in a terror plot, the case has been reopened and the focus is now on the blatant killings conducted by the State. A few months ago, I had spoken to well-known human rights lawyer Vrinda Grover, who is the counsel for Ishrat’s mother. She said, “It was soon after the Sohrabuddin case was taken up by the Supreme Court and the nexus between the cops and politicians was exposed that I was contacted by Ishrat’s family to take up their case.

“It was the conviction of the mother and family in the innocence of Ishrat and their determination to have her name cleared of the tag of terrorism that persuaded me. They wanted their respect and dignity restored. As a human rights lawyer, I often represent victims of police atrocities and violence. But, after meeting Shamima Kauser (Ishrat’s mother) and her children, seeing the case file and the reading the truth about Sohrabuddin’s murder, it was clear that this ‘encounter’ was not just a crime committed by some trigger-happy cops, but rather part of the State-sanctioned and planned violence against Muslims, which was unleashed in the genocidal pogrom of 2002. 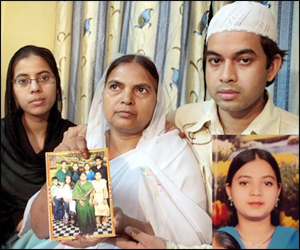 “The FIR recorded by the Police of these encounters refers to the riots and killings of Muslims in 2002 and claims that the alleged ‘terrorists’ wanted to kill Modi and take revenge for the 2002 attack on Muslims. These encounters, about 22 of them in Gujarat, are part of the politics of hate to polarise and build mistrust and fear between the communities. It is very important to recognise a clear pattern of targeting Muslims and demonising them as the enemy that must be eliminated, by use of State power, whether through engineered riots or staged fake encounters i.e cold blooded murders by those in State power.”

She went on, “It is very important to bring out the truth behind these fake encounters because in Gujarat there is a criminal nexus between the political executive, the police and even persons in critical positions in the IB, both in the Centre and State. This is a very dangerous and lethal combination and before our eyes a fascist State is in the making. To fight for Ishrat’s truth is part of the battle against fascism. The mechanics of electoral democracy may not deliver justice and the legal battle is important so that the killers and their masterminds are unmasked and punished.”