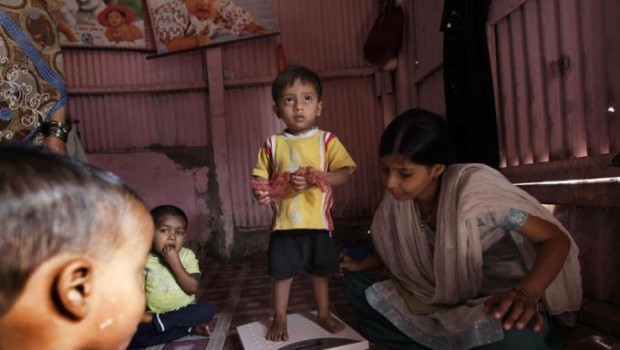 City’s children less malnourished than before

But many women are marrying as minors and several are not breastfeeding their baby within an hour of giving birth.

At long last, it’s good news on the state’s malnutrition front. For the first time in a decade, Maharashtra’s malnutrition figures have shown a very positive trend – the Comprehensive Nutrition Survey in Maharashtra 2012, released by the state’s Chief Minister Prithviraj Chavan yesterday, reveals sharp declines for malnourished children under two years of age for such parameters as stunting (too short for their age), wasting (too thin for their height) and underweight (too thin for their age).

Heartened by the numbers, Chavan announced that the state would widen the scope of its malnutrition efforts November 14 onwards, with a special focus on fighting malnutrition in Mumbai and other urban pockets in Maharashtra. The survey was conducted by the International Institute of Population Sciences (IIPS) in association with the UNICEF.

The survey is the first state-specific nutrition survey conducted with a focus on infants and children under two years of age, and their mothers. A representative sample of children under two years of age was selected from each of the six divisions of the state – Mumbai, Pune, Amravati, Aurangabad, Nagpur and Nashik. Data was collected between February and May 2012, and indicators from the National Family Health Survey (NFHS) – 3 of 2005-2006 was used as the foundation for advocacy, policy and programme action for maternal and child nutrition.

Now for the bad news

However, of the 1,346 mothers surveyed in the state’s urban pockets, only about 55 per cent were found to have breastfed their newborn baby within an hour of birth. Studies have shown that breastfeeding a newborn child within the first hour of its birth is the best way of building the baby’s immunity and arresting incidences of malnutrition and neonatal deaths; the same logic applies to babies exclusively breastfed for the first six months of its life.

Also, over 23 per cent of surveyed women in the urban pockets said that they had been married before age 18.

As part of the survey, 2,694 mothers with children under two years of age were surveyed for such parameters as work status, marriage and fertility, antenatal and delivery care, lifestyle indicators, and anthropometric measurements. Of these women, the ratio of breastfeeding in rural pockets was found to be better than that in the urban areas. Only 49 per cent women in urban pockets said that they had breastfed their babies exclusively in the first six months of life. Findings also revealed that bottle-feeding and early complementary feeding was on the rise and was very common, especially in the urban areas.

Chavan was concerned with these findings. “Low breastfeeding percentage within an hour of birth even as over 90 per cent mothers are having institutional delivery suggests that private nursing homes are not encouraging breastfeeding enough,” he said.