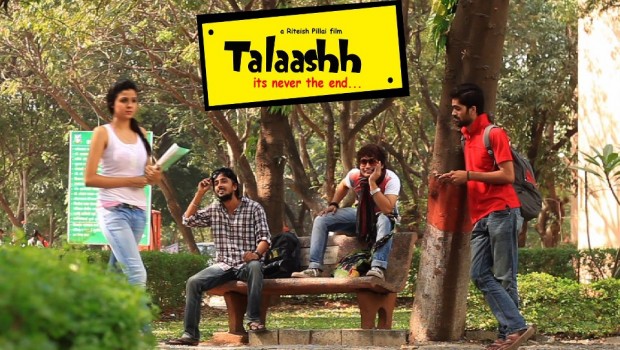 How we made a movie

A student writes about the experience of being part of a filmmaking team. The film premieres today at Mumbai University.

The students of Mumbai University’s Department of Communication and Journalism made an in-house film recently. Our team comprised 15 people altogether, including the actors. The film is a romcom and we named it Talaashh: It’s Never The End – and no, our film bears no resemblance to the recent Aamir Khan starrer, apart from sharing a name.

This is the promo of our film:

Before I ever thought about being part of a filmmaking team or making a film of my own, in the days when my film experience was devoted solely to watching, criticising or critiquing a film, I had never realised the effort that goes into making a movie. I often confused ‘criticising’ with ‘critiquing’, and realised only later that the first one is about passing judgement on a work while the other one is about a careful judgement considering all the merits and faults of a work.

I learnt all this while and more while working on our film. The credit goes to Riteish Pillai, the film’s editor and director, who thought I could make it, and who I assisted for the film’s sound.

Talaashh: It’s Never The End was written by Prateek Singh. The film’s director and editor, Riteish, was the winner of the Best Documentary prize in 2012 for his entry in the Mumbai Academy of Moving Image (MAMI) festival. Sumit S Angne, director in-charge of the making of the film, won the Best Documentary prize in the ‘Young Film Makers Competition, Chennai’ in the same year.

The film Talaashh is about Nasir’s (Nasir Imam), Abhay’s (Abhay Mishra) and Prateek’s (Prateek Singh) talaash in life, with a whole lot of twists and turns by other characters – Riddhima (Riddhima Sishupal), Singham (Brajesh Mer) and Subhu (Subbaiah Moopanar). Romance and comedy rule the storyline.

Other members of the crew are prizewinners, too – Nasir and Prateek had recently secured second place in the Helen O’Grady International ‘Lets Act’ drama competition held at Sophia’s College on January 5, 2012 for their play The Darkest Desire.

Our film’s Director of Photography was Lavesh Dali, who shot the film on a Canon EOS 550D. Believe it or not, the entire film was shot in a week; the post-production, however, took much longer. Our team devoted a month and two weeks to the film’s overall production.

During the course of post production, we decided to record a theme song since we had a composer, Karthik Rao, in our midst. Karthik composed and voiced the song with Sanchita Kale, while Ashay Sahasrabuddhe contributed the lyrics and Noel D’Souza played the guitar. 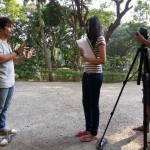 All in all, it was a really fun experience working on this film. Though I have restricted the roles played by crew members by assigning them posts (which we had to do for the film’s credits), the fact is that each of us put in our best in all aspects of pre-production, production and post-production. We are proud and excited that the film screens today at Garware Auditorium, University of Mumbai (Kalina) at 2 pm, with film director Vishal Inamdar and assistant director Suchitra Varma officiating as chief guests.