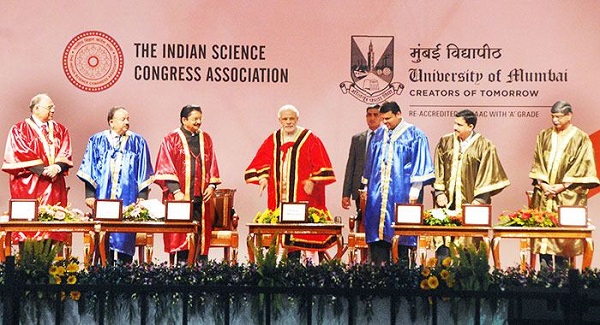 Of flying chariots and other ‘scientific’ claims

If the claims in the recent Indian Science Congress were to be believed, ancient India had invented and discovered everything.

I don’t understand this. If India was really as evolved as all that, where did all the knowledge go? Worse still, why are we such an unevolved species now, when we have technology at our fingertips?

I have been following news reports about the Indian Science Congress held recently in Mumbai, and I am amused and bewildered by turns. The scientists attending this Congress must have been even more bewildered by the goings-on.

Here’s why. If the claims made during this event are anything to go by, the India of yore achieved the unimaginable. Take flying, for starters. As per one claim, Indians had flying devices that not just roamed the skies from one end of the universe to the other, they also hopped planets and were able to fly sideways and backwards. And here we are in present-day India, our flights stalled for hours and passengers stranded when their standard issue plane is able to fly in no direction, including flying forward.

Then somebody else spoke with authority of ancient Indian doctors performing miracle cures and conducting the most advanced surgeries with basic tools.

A Lucknow-based scientist said India knew about America years before Columbus supposedly discovered it in the 15th Century. According to the scientist, not just India, but all of Asia was aware of America long before Columbus. (I wonder who will break the news to US President Barack Obama when he arrives here for the R-Day celebrations).

And then I began to wonder, if we were all that wonderful in the ancient years, at what point did we start losing this information? How is it possible that entire generations became slowly ignorant of their predecessors’ great discoveries and inventions? Surely there must be some record in existence somewhere that documents all these ‘facts’ that were laid out at the Congress? Where is the proof that all this happened?

And assuming that all of this was true, it is a shameful state of affairs that today, we are unable to solve murders that are years old. We cannot contain our pollution levels and we have no concept of population control. We don’t know how to treat our old parents and we are shamelessly sycophantic of moneyed people. Despite so many different industries opening up today, we still push our children into studying either medicine or engineering.

So what is the truth? Were we really such an astonishingly intelligent civilisation? So why are we such buffoons now?