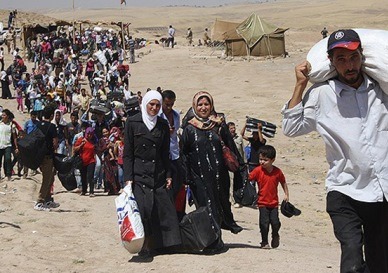 It is still hard to see the picture of little Aylan Kurdi and not cry. The three-year-old Syrian boy’s body was washed ashore after the dinghy he and his family were in capsized as they fled to Greece. Along with pain at the fate of a young life snuffed out through no fault of its own, is the numbness of knowing that all the Syrian refugees are actually fleeing into nowhere, with no future.

Though a few countries have acknowledged that they would take a few refugees, the fact is that nobody wants the burden of housing scores of people from another land. At least some European nations opened their borders; the rich Arab nations have still not done so!

Though there is no possibility of this happening, but I can’t help wondering what would happen in the Syrian refugees somehow found their way to our shores. I think their entry would be banned straightaway – after all, we are so fond of banning everything in sight. Even if they did sneak in, they would be constantly under the scanner as troublemakers, or worse, suspects connected to ISIS or similar outfits!

What is ironical is that though more than half of New Delhi’s population comprises refugees at some point – they themselves, if not their parents and grandparents – have fled from undivided Punjab during the Partition, their attitude towards migrants and refugees is completely deplorable. Last year, hundreds of Burmese refugees, the Rohingyas, fled their land to seek refuge in Delhi.

Not only was their condition hard to describe when they got here, their condition is even worse today. Neglected and shunned by the capital city, they continue to live in squalor. When they arrived here, they hadn’t eaten in days, and most were malnourished and about to die. Nothing has changed today – they live in a disease-infested ghetto near Kalindi Kunj in New Dlehi, close to the outer fringes of Okhla. I would say they are living like outcasts, worse than animals. I wish their entry had been banned instead.