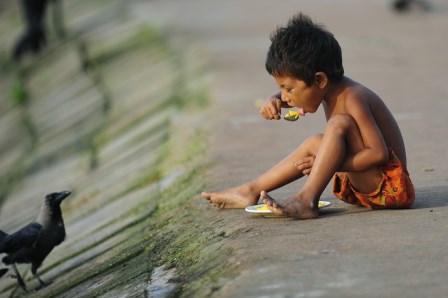 by Child Relief and You (CRY)

As many as 41 per cent of children below the age of six years in the slums of Mumbai are underweight, according to a study conducted by volunteers of CRY- Child Rights and You (CRY) for children below the age of 6 years. The children do not fare any better with respect to the other indicators of malnutrition. The percentage of children found to be suffering from stunting stands at 71 per cent and is significantly higher than what has been found in the NFHS figure of 47 per cent in 2005-06.

Nutrition and immunisation are most critical for a child’s survival in the first six years of his or her life. Shockingly, even the immunization coverage in the slums in Mumbai is much worse than expected. Only half of the children, 49 per cent under the age of three years, have received any vaccination at all (at least one vaccine).

These children dwelling in the most underprivileged sections of the city, most of them belonging to migrant families bear the maximum impact of urban poverty; especially in the absence of caregivers, who are mostly engaged in informal economic roles.

This household survey on early childhood was conducted in slums across five major metropolitans in India namely Delhi, Mumbai, Chennai, Bangalore and Kolkata. The slums in the five metros do not show a positive trend with respect to child nutrition. Chennai has the most number of children battling malnutrition in its slums, with 62.2 per cent being underweight; Kolkata and Delhi slums have 49 and 50 per cent underweight children, according to this study. Bangalore fares slightly better, with 33 per cent children found to be underweight.

Even as Aanganwadi Centres (AWCs) remain one of the most important institutions for ensuring nutrition, health and early education of children below 6 years, only 46 per cent children dwelling in slums are enrolled. In Mumbai, the enrollment in AWCs in slum children stood at a despondent figure of 62 per cent.

Only 36 per cent of parents whose children were enrolled in AWCs reported that the growth monitoring was happening on a monthly basis.

A significant proportion of parents whose children are going to private pre-schools and other institutions do not believe that their children are receiving essential services for their health and survival. So far you can infer that, while the Aanganwadi worker is providing the services within the institution, provisioning services through community outreach continues to remain a challenge. An indicator that substantiates the gap between the service and the community is the fact that though growth monitoring was done for 70 per cent of children, only 48 per cent of parents were informed. In Mumbai, for instance, 62 per cent of parents were not informed that their child is malnourished.

While there is an evident need for improvement, the study shows significant positive perception of parents towards Aanganwadi centres. 89 percent of parents feel safe in sending their child to AWCs and 98 percent perceive the Aanganwadi to be child friendly.

(Picture courtesy www.wsj.com. Image is used for representational purpose only)