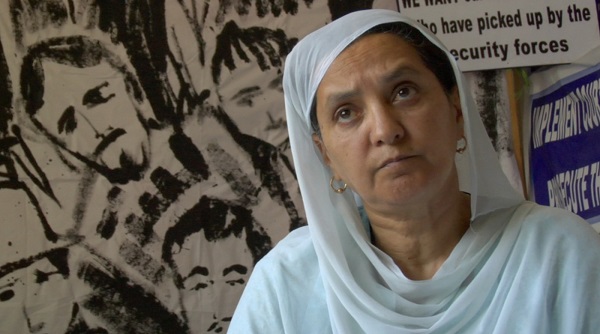 Saluting a mother on Mother’s Day

Parveena Ahangar’s son was picked up for ‘questioning’ by Kashmir police in 1990. She’s still waiting for him to return.

In between several scams being unearthed in this country daily, the more unfortunate among us have already geared up for Mother’s Day. Oh yes, it’s a big day to tell your mother how you feel! No matter how contrived this entire exercise might sound, there are several givers and takers for this day.

This Day brings to mind several unsettling questions. Where are those chiddren who are missing from their homes? Where are our young boys, who were picked up various security agencies for ‘interrogation’, never to return? What is the fate that befell their mothers? What kind of days do these mothers lead?

During my journalistic journeys to various parts of the country, I have met families who have had horrifying stories to recount of how their young children went missing, or were picked up for interrogation and either detained, or who have had time behind bars choke the life out of their fragile forms. There are children missing for these reasons in every part of this land, but the Government still does not seem to care enough to find them.

This is an ongoing reality in the Kashmir Valley – of teenaged boys being picked up for interrogation by various security agencies, never to return. They are declared missing, and their story seemingly ends there. 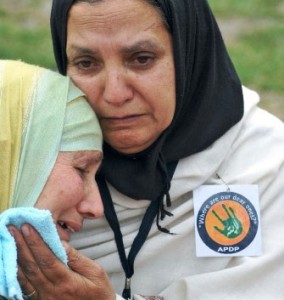 When I first met Parveena Ahangar (see pic on left and feature image), the Srinagar-based woman who heads APDP (Association of Parents of Disappeared Persons), she told me about her young ‘missing’ son, Javed. Listening to her, I felt emotionally drained, wondering at the extent of the brutality of today’s governance, where the State does not even stop at snatching away our young. It has been an ongoing fight since 1990 for this now middle-aged Kashmiri mother; it was in 1990 that her school-going son was picked up from their home in Srinagar’s Batmaloo locality and taken away for interrogation. Javed never returned and there has been no official news of his whereabouts at all.

“My son, Javed, was picked by security agencies in 1990. Security men came to our home to pick him up, saying they were taking him for interrogation. We pleaded with them, saying he couldn’t have done anything wrong, that he had just passed his matriculation. But they didn’t listen and took him to the interrogation centre at Pari Mahal. We never saw him again,” Parveena recounts.

That incident shattered the life of the entire family. Ahangar’s husband fell ill because of the trauma, and gave up working. He remains in poor health to this day. The other three children in the family were too young to realise the implications of their brother’s disappearance at that point, but the ongoing trauma has left its impact on them, too.

Today, Parveena heads the APDP, the longest ongoing non-violent movement of parents whose children have been taken for interrogation and never come home. Hundreds of families have been ruined by their loss as they try to cope with the trauma, but Ahangar is one of the steely few who will not give up the search. She says, “All these years we have been living in sorrow. I keep very unwell. We have exhausted all our resources trying to locate Javed in the various jails of this country, appealed to every possible government authority, to politicians across party lines…but there have only been disappointments.

I’m not giving up, and I will fight for as long as I’m alive. Ours is a peaceful, non- violent struggle, but the State and these politicians don’t bother. I am determined to carry on with the struggle.”

But not many mothers have her grit. Many have already given up hope. Their words echo in my ears: “To bury your dead son is one thing, but to go travelling from jail to jail and from police station to police station, looking for your son, is another sorrow.”

Meenakshi Ganguly, South Asia Director at Human Rights Watch, who has authored Everyone Lives in Fear, a report on the human rights situation in Jammu and Kashmir, said to me in 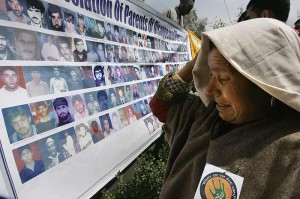 an earlier interview on the missing young men of the Kashmir Valley, “The family members of those that ‘disappeared’ have been campaigning for years. Parents have died waiting for a lost son to come home. Wives live with the label of a half-widow. These disappearances are a lasting wound inKashmir, and we hope that families will finally have some answers and receive justice.

“Disappearances are among the most heinous of human rights violations because families are left without answers, caught between hope and despair. I have met numerous families that are still waiting for news of their loved ones. Some keep hoping for a magical reunion. Others say that they want at least to be able to weep at the grave of their lost one.”

Noted academic Uma Chakravarti, who formed a support group for APDP in Delhi, had told me during an earlier interview, “We need a judicial commission to probe J&K disappearances. No one wants to address the Armed Forces Special Powers Act and the immunity it gives to the security forces, and that rapes, custodial killings and forced disappearances that will continue unless there is legal redress for violations of people’s rights. The easiest thing seems to be to not react or to pick up an item for a little while and then drop it.  The Government keeps talking about dialogue and confidence-building measures but has done little in terms of action.

The first thing it should do is to set up an independent judicial commission into disappearances so that the average Kashmiri and the individual families that have been pursuing the cases of the disappeared can have a sense of closure. This has been done in Sri Lanka to investigate the large number of disappearances in the 1980s. It will be the first step in pursuing State accountability. It will have a tremendous impact in Kashmir. It will demonstrate the Government’s commitment to a rule of law.”