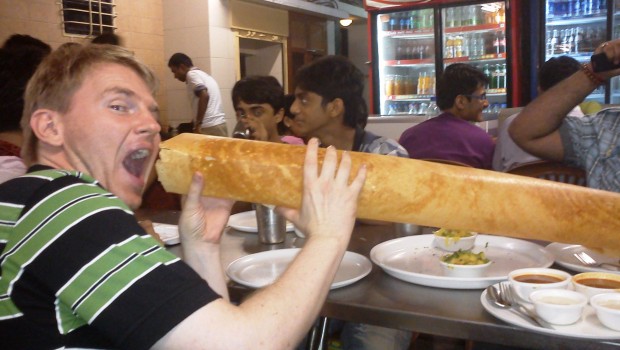 Of colonial cuisines and fusion foods

If the food we eat is a mirror into our culture and our times, which culture does fusion food reflect?

For years, food has been used for more than just eating. It has provided a lens for social and anthropological analysis. Its production, procurement, preparation, presentation and consumption has always been central to our times and culture.

Of particular intrigue to me has been the concept of fusion in food. Somewhere between my inherent ‘purist’ culinary preferences of eating a cuisine the way it is meant to be eaten (respecting its original, ethnic procedure) and a new-found flexibility in blending various flavours and ingredients together, such that they individually compliment each other, I am now more open to the idea of fusion food – that which is cooked consciously, with definitive techniques, intentionally marrying ingredients and tastes to produce a state of delightful transcendental culinary bliss, appealing to the most refined palate.

Contrary to assumption, fusion food is not really a new world phenomena. It has been around since eons. For time immemorial, knowingly or unknowingly, people all over the world have been indulging in fusion food. Many centuries ago when the Chinese came to America, the Africans moved to Europe, the Brits colonised over half the world and the East Indians and French learned to dine together, was when fusion was born.

Soy Sauce, the quintessential condiment sauce that accompanies Asian meals, is a great example that illustrates how colonialism permeated Korean cuisine. Considered the ‘soul’ of Korean cuisine, soy sauce was originally made in Korean homes, with each family having its own recipe handed down from generation to generation. However, with the industrialisation of its manufacturing process in the 20th century, this distinction began to disappear. The manufacturing techniques drifted, far from being traditional Korean methods into those introduced by the Japanese during the colonial period.

Today, most Koreans do not even realise that the soy sauce they consume on a daily basis is a product of the colonial experience. The story of the soy sauce thus, shows the far-reaching, longstanding and unforeseen consequences the Japanese colonial rule had on the Koreans. 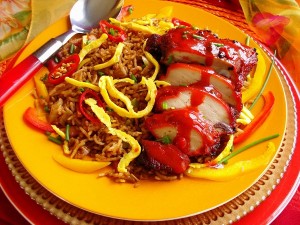 The infamous Indonesian Nasi Goreng (in pic on left) is a stir-fried mixture of rice, chicken, shrimp, and seasonings. This dish exemplifies the complex culinary heritage of the Indonesian islands, which have been conquered and colonised by many different countries over the centuries. Here, rice – the main ingredient – was introduced by sailors from India, who arrived around the time of Christ. The technique of stir-frying came from the Chinese, who explored the islands in the fourth century. Chillis were brought by Renaissance Portuguese explorers who first discovered this ingredient in the Americas and the accompaniment of hard-boiled eggs is a legacy of Dutch traders from the colonial era.

Banh Mi, which is the name for both the bread and the sandwich, is also a classic fusion Vietnamese dish, the ingredients of which have roots in old Vietnam, French colonial Vietnam, and New World cuisine. The bread, although called a baguette, is not the traditional long French baguette, but a smaller ‘single-serving’ size. A combination of French and Asian styles of baking, the Vietnamese baguette is baked crispy on the outside and soft on the inside. To throw in a bit of Asian flair, it is made with half wheat and half rice flour, to give it a light and airy feel.

This baguette serves as the vessel that brings all the flavours of this sandwich together. Stuffed with ingredients such as pork rolls, grilled meats, fried eggs, pâté and seasoned stir-fried vegetables and packed with condiments such as pickles, chillies, cucumber and the must-have cilantro garnish, the Banh Mi is considered the iconic product of French colonialism in Indochina, combining ingredients from the French (baguettes, pâté and mayonnaise) with native Vietnamese ingredients, such as cilantro, chili peppers, and pickled carrots.

Kaya Toast (in pic on right), the classic breakfast dish that has reached ‘national’ proportions in Singapore consists of toasted bread filled with kaya (a jam or custard made from eggs, sugar and 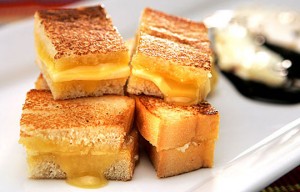 coconut milk) and is flavored with pandan (a sweet-tasting tropical green leafy plant used extensively in Southeast Asian cuisine). Butter or margarine may be spread at times, as well.

Served with soft boiled eggs, soy paste and pepper on the side with hot tea or black coffee (or ‘kopi’ as it is called here), the inception of the Kaya Toast can also be traced back to the colonisation of Asia. The Hainanese kitchen hands who worked on British ships were the culinary match-makers of this remarkably local-yet-borrowed breakfast delight. On settling down in the then British colonies of Singapore and Malaysia, they started selling ‘glocalised’ versions of the foods which they prepared for the British, including coffee, toast and French toast, to the local populations. The western jams and preserves favoured by the British were swapped with native coconut jams or butter flavoured with ‘pandan’, thus giving birth to a breakfast staple that has now blossomed into a communal must-do activity in Singapore.

Indian kitchens too have been gifted European culinary influences through their colonisers. One of the first European colonies in India, Goa, manifests the indelible mark that over 400 years of Portuguese reign left on its contemporary culture, clearly most evident on its cuisine. The most famous of Goa’s hybrid dishes, which became a staple of the country’s Anglo- 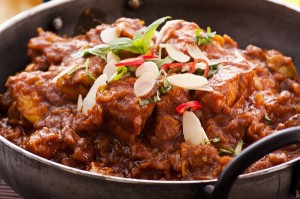 Indian population is undoubtedly the ‘Vindaloo‘ (in pic on left), a spicy stew, usually of pork, that derives its name from the Portuguese vinho (wine) and ahlo (garlic). The Indo-Portuguese version of this dish was modified, by the substitution of vinegar for the red wine and the addition of red Kashmiri chillies with additional spices.

Many aspects of everyday staples from our ‘desi’ diets today are examples of fusion of food from our colonial past. Such as the ‘Vada Pao‘ – where the ubiquitous ‘pao’ is a legacy of the Portuguese, who brought their white bread of the same name to India years ago. Teamed with an authentically construed spicy Maharashtrian vada, it makes for the Mumbaikar’s favourite ‘wherever-and-whenever’ kind of go-to meal.

The British infected us with their taste for tea, making it the nation’s favourite pastime addiction. With our Indian spice box sprinkling its assortment of spices such as ginger, nutmeg, cinnamon, cardamom and clove in it, we quickly turned the English ‘tea’ into a delectably soothing ‘Chai’; an inseparable element of everyday Indian life.

Clearly colonialism has had an immense effect on cross-cultural culinary match-making. Colonial cuisines such as the ones listed above and many more, have evolved gradually over time. They are an ever-lasting proof of the negotiations and collaborations that took place between the expatriate colonisers and the locals. They are representative of multiple diverse sub-cultures that ingrained themselves into each other, fusing cohesively to metamorphose into one unique greater global culture. This cuisine was not subject to a deliberate act of imposing imperialistic designs but in fact, involved a process of consuming local and foreign foods, usually through the efforts of smart and innovative indigenous staff members – all fusion chefs in their own right.

When food from the ‘outside’ was brought ‘in’, into any part of the world; it was welcomed, contextualised, glocalised and then served back in an incredibly blended yet transformative

plate of World cooking. Palates were adapted and taste buds were honed to value and respect, savour and honour that which was served to us. Spice-loving gastronomers learnt to value the simplistic notion of what they thought all along was ‘bland’ while their foodie counterparts who had been unaccustomed to ‘spices’ began devouring masalas gradually, acclimatising their palates to this new sensation of heat and temperature.

Fusion food did not just bring together ingredients and techniques widely separated by geography and culture, but with the marriage or at least the romance between far-flung ethnic foods and their preparations, somewhere along the line, it also helped make the world what it is today – a much smaller, more savoury place to live in!

A Mumbaikar by birth and a New Yorker by choice, recently-turned global nomad Shweyta Mudgal is currently based out of Singapore. An airport designer by day, she moonlights as a writer. ‘Outside In’ is a weekly series of expat diaries, reflecting her perspective of life and travel, from the outside-in. She blogs at www.shweyta.blogspot.com and is a happy convert who no longer thinks of ‘Fusion food’ as ‘Confusion food’, thanks to some really memorable culinary experiences.