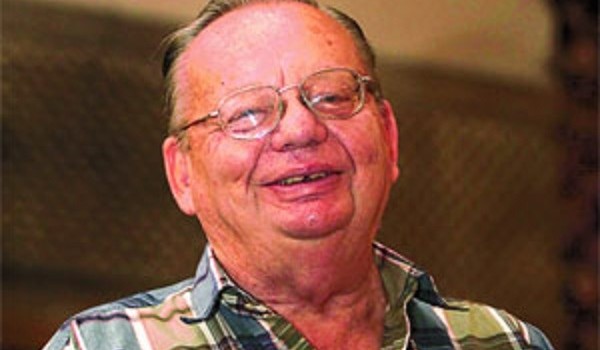 What’s Ruskin Bond doing in New Delhi at this time of year? This is exactly what I asked him, in our very first meeting, this week. Though I have been reading him for years, I never got to meet him. And when I finally did, the conversation between us simply flowed. I think popular and ‘ongoing’ writers (he has been writing for over half a century) like him follow certain basics and that’s what attributes to their success – besides good writing, of course.

The contributing factors are being absolutely down to earth and no shying away from talking about the twists and turns of their lives.

Ruskin Bond’s writing has attracted Bollywood on three occasions – Shashi Kapoor made the film Junoon based on Bond’s novel The Flight Of Pigeons, while Vishal Bharadwaj adapted two of his stories, The Blue Umbrella and Susanna’s Seven Husbands (which was named Saat Khoon Maaf), both of which were critically-acclaimed.

Anyway, getting back to the basic question, why did the very private man leave Mussoorie and land here now, and he said: “For one, I had to interact with children from three schools — two Delhi schools and one in Karnal and then one of my new books gets launched.”

The 79-year-old Ruskin Bond’s latest work is Hip Hop Nature Boy, a collection of short stories released in 2012, while Roads To Mussoorie was launched here in New Delhi in 2005, when I met him for the first time. He had this to say right at the start of our conversation, “Instead of a Foreward I am writing a Backward, because that’s the kind of person I have always been. Very backward. I write by hand instead of working on a computer. I listen to the radio instead of watching the television. I don’t know how to operate a cell phone”. 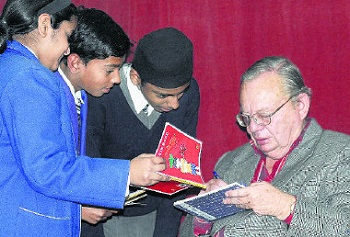 He adds, “Sometimes, I read books upside down. If I have to read a modern novel, I will read the last chapter first, usually that’s enough. Sometimes, I walk backwards. In this book, I take a backward look at people I have known and interesting and funny things that have happened to me on the way up to the hills or down from the hills”.

Focusing his attention to the present-day situation in Delhi, I asked him about the spurt in rape cases. He said, “It could be the sexually explicit films being screened on the television, affecting young minds. Then, they are never told that romantic love is one thing and sexual anarchy is different. Our society is too repressed, so people try to break free and go on a rampage. Crime is worsening here, the situation wasn’t so in the 60s when I had lived here with my father who was an Air Force officer.”

Going by the photographs I had seen of Ruskin Bond, I was sure the writer would be one of those ‘difficult-to-draw-into-a-conversation’ types. But then, as they say, looks can be deceptive. And last week, in New Delhi’s heat and dust, he and I sat and chatted for almost 45 minutes. He was spontaneous, straight forward, and absolutely down to earth.

Have you ever experienced loneliness? You haven’t married and have no constant companion.

I stay with an ‘adopted’ family, so that way the apartment is full of people. The apartment has four rooms and we are twelve people living in it. The family consists of a set of parents and their two sons who are both married and have children. Also, this profession – writing – is such that you can only pursue it in solitude. You have to be alone so that you can write. In the evenings I do go down to some friend’s home for a chat and a drink. I have two or three such close friends.

A lot of your readers, including me, have this little complaint about your writings – there’s very little focus on sex or say sexual romance. Why?

(Smiles, nods) You’re saying this, but once, during the Emergency, I was hauled up in court on charges of obscenity. Yes I was, for my novella titled The Sensualist. I had to appear in court, though I was later acquitted. And I must tell you that there was nothing explicit in the book — maybe some sexual references in a romantic context.

Why do you think there’s this sexual fury and madness today, in the form of so many rapes taking place?

Sex in a context – that is, sex in romantic love – is one thing, but sexual anarchy is totally different. Our society is too repressed and so people are breaking free and going on a rampage. Sexually explicit films are shown on television and this affects viewers as well.

Why did you decide to settle down in India, when you had the option of moving to the United Kingdom?

My mother did send me to England, but I returned. I wanted to be back and live here in India, although my two siblings are settled in Canada. I chose Dehradun and later moved to 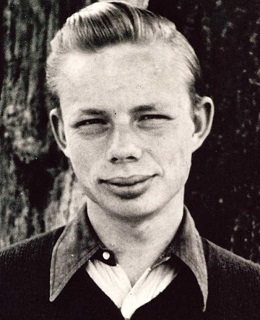 Mussoorie, because earlier my mother and step-father (my mother had re-married, a Punjabi businessman) lived there. Later, I didn’t want to live in a town which was too far from New Delhi, because of my writing and meetings with my publishers.

You have always worked as a freelance writer. How difficult does it get on the financial side?

Financially, the going has been tough. All my life, I have lived in rented accommodation. It was only in 2004 that I managed to buy an apartment in Mussoorie. I wrote and wrote, for just about any publication in the country, be it a sports publication or Yojana. In fact, I must tell you this funny incident – that time Yojana was being edited by Khushwant Singh and though I’d sent a romantic and sexually explicit story, he published it in Yojana!

How do you manage with writing long hand in this age of computers and laptops?

Earlier, I used the typewriter but lately I had a back problem so I stopped typing. And now I use longhand. That’s the way I give my manuscript to my publishers. It’s a fairly neat hand!

You are a white person with a Christian name. Have you ever felt insecure on account of your minority status?

No, not now, maybe when younger. In fact, during the Independence phase I remember being hit by a stone in Dehradun. But nothing now.

You had just mentioned that your mother had married a second time – a Punjabi businessman. Do you have any half sisters or brothers and how did your stepfather treat you?

Yes, I have a half sister – Premila Singh – who lives in Ludhiana. She is about ten years younger to me. She even visits me at Mussoorie. Regarding my stepfather, he was okay. I was free to do what I wanted, he didn’t interfere in my life.

This interview was first published in The Tribune.

One Response to The man and his road to Mussoorie