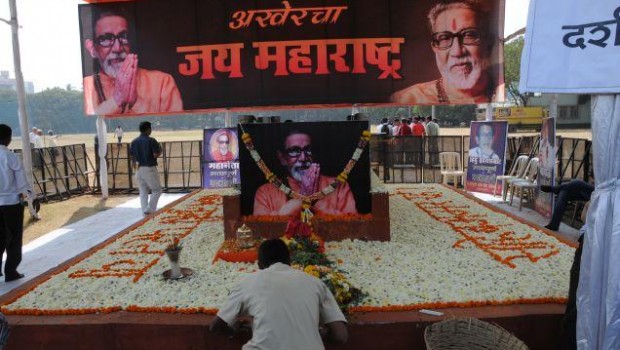 But State anticipates law and order problem while the memorial is removed; BMC to submit action plan to State soon.

While the Shiv Sena slugs it out with the State Government about wanting a Bal Thackeray memorial at Shivaji Park, the makeshift memorial put up for the late Shiv Sena chief’s funeral last month, is now to be removed. This is not without its share of issues, however – the State anticipates law and order problems while the temporary memorial is removed.

The State had given permission for a temporary memorial and funeral to take place at Shivaji Park in the wake of Thackeray’s death on November 17, 2012, and since it was rightly anticipated that lakhs of people would turn up for a final darshanof the late leader. However, the Shiv Sena was to remove the memorial after the funeral was over. Since the Sena did not remove it, and shows no signs of doing so, the State has now instructed the Brihanmumbai Municipal Corporation (BMC) to prepare an action plan about the memorial’s removal and submit it to the Government at the earliest.

However, security personnel will have to be deployed at the site at the time of removing the structure. BMC Commissioner Sitaram Kunte will consult with Mumbai Police chief Dr Satyapal Singh about the presence and number of security personnel. Meanwhile, Uddhav Thackeray has still not issued his stand on his party’s demand for a permanent memorial dedicated to Bal Thackeray at Shivaji Park, a move being opposed by local residents and the State Government alike.