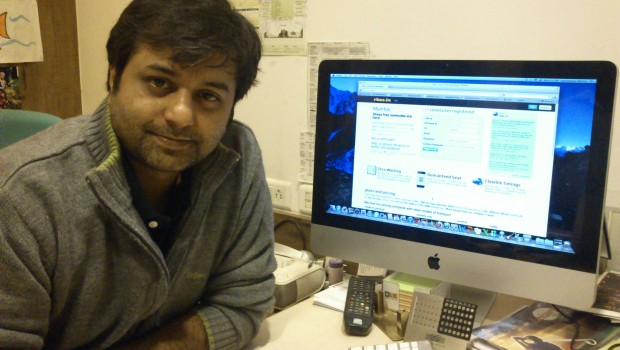 A point-to-point bus service aims to solve your commuting woes, when autos and taxis are just too expensive to hire.

The recent revisions in auto and taxi fares have probably sent your monthly budget straight to the cleaners. And nobody’s really willing to wait for crowded BEST buses to lumber up and take them on board. But come to think of it, buses are actually a better road transport solution – they take a lot of people from place to place, and they don’t cause as much congestion as smaller vehicles do.

Which was what prompted Siddharth Sharma (37), a computer programmer who is an IIM alumnus, to start rBus, a bus pooling company that allows people to take a comfortable, point-to-point bus commute to work. All customers have to do is inform the company that they wish to take a bus from a certain point to a certain destination, and the bus arrives with prior intimation.

“I started rBus because in our city, there is a demand for good quality transport that saves people time and which is clean and hassle-free,” Siddharth tells The Metrognome. “BEST buses are often overcrowded and slow. Our buses reach on time, and customers don’t have to wait long hours for them to arrive or reach the destination. Also, once you have booked a seat, nobody else can take your seat.”

Additionally,  each bus is fitted with a GPS tracker, and users are informed of the bus’s location a few moments before it arrives at their requested spot. “Time is of the essence in Mumbai,” Siddharth says. “Besides, people want a comfortable commute from their homes to their offices. The way we work out the bus allocation is, we first study the demand on a particular route. If we have about 200 people on a route, we hire about ten 20-seater buses. There is no compulsion on the commuter to take a bus at a certain time, we work flexibly around the commuters’ timings,” he explains.

The buses are hired from private contractors, and payment for the service is taken on a monthly basis. “A non-AC bus would cost the commuter Rs 1,800 per month, while for an AC bus, it is Rs 3,500 per month,” Siddharth says. “So far, I have a pool of over 165 registered users. When there is a demand on a particular route, I get a contractor who provides the bus for that route.”

He says that from the time he started the company in July this year, demand is slowly going up, though consumers are often finicky about the pricing. He says he even revised his original pricing – Rs 3,000 per month for a non-AC bus and Rs 5,000 for an AC bus – because customers found the rates too steep. “But there are also various people who are interested in availing of the service. I have queries from the CEOs of certain companies, who are very interested in this project, since they are concerned about employees reaching office late owing to delays in travel,” he says.