Motorola has unveiled its awaited low-end Android handset, the Moto E. In a world showcase, the Moto E got launched in India, as it goes on sale midnight, available on Flipkart, just like the Moto G. 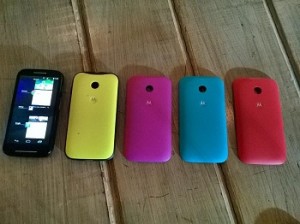 Running on Android 4.4.2 with a few Motorola applications services in place, the company promises it will provide at least one major upgrade to the phone, and, if possible, will provide software support for 18 months. The phone packs in a 1,980 mAh battery unit, and 4 Gb of internal storage, expandable up to 32 GB.

The Moto E follows a similar round curved back design like the Moto G, but has a noticeably more bezel size.

This dual-SIM smartphone comes with something called Intelligent Calling, which allows you to set one of the SIMs as default call and messaging number for your contacts. Connectivity-wise, there is Bluetooth 4.0, 3.5mm headset jack, 3G, WiFi, FM Radio.

Apart from the phone, you can also buy as many as 9 different-coloured shells from Flipkart for the phone. The device comes in White and Black colours, and has been launched at Rs 6,999.