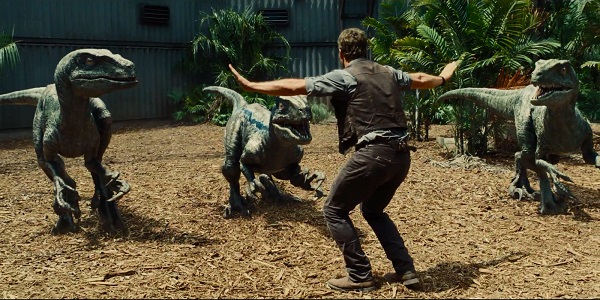 A complete edge of the seat thriller, this film will keep you engaged till the end if you suspend disbelief.

Almost 14 years after the release of Jurassic Park 3, director Colin Trevorrow carries the legacy of our beloved dino series on his shoulders in the fourth installment of the Jurassic Park film franchise.

The films starts with a baby dinosaur trying to come out of an egg. Jurassic World is now a fully functional dinosaur theme park owned by Masrani (Irrfan Khan) and managed by Claire Dearing (Bryce Dallas Howard). As a business person, Masrani feels that innovation is required to attract more visitors to his park; hence, along with Dr. Henry Wu (Wong) they furtively play with the genes of the dinosaurs to create a new genetically-modified mega dinosaur – the terrifying Indominus Rex. The Rex is monitored by creepy military consultant Hoskins (Vincent D’Onofrio).

Gray and Zach Mitchell are brothers who have come to visit their aunt Claire and also the theme park under the supervision of Claire’s assistant Zara. Meanwhile, Owen Grady (Chris Pratt), works at Jurassic World as a Velociraptor expert and trainer. He has trained four Velociraptors – Blue, Charlie, Delta and Echo. When his ex-girlfriend Claire asks him to train the Indominus Rex, he does so reluctantly.

Owen and Claire discover that Indominus Rex has escaped from the enclosure, while Gray and Zach leave Zara and start exploring on their own. By this time, the audience has guessed the graph of the story – Indominus Rex creates chaos around the park while Owen and Claire try to rescue the boys.

The pace of the movie is well maintained and keeps the audiences engaged. The special effects and background score of the film are stunning. Rexy, the female dinosaur from the first Jurassic Park is seen in the end moments of the film, where she fights Indominus Rex. The film’s last scene shows Rexy climbing on top of a helipad and inspecting the havoc caused by Indominus Rex – this ending shows the possibility of the next installment from this franchise.