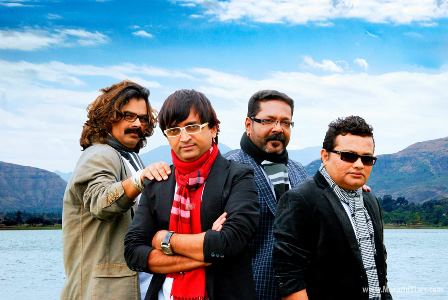 Bioscope is a compilation of four films by four directors, made into a single film. These individual films are not connected in terms of plot or characters; however, the connection between them is all the four stories are based on poems by renowned poets.

The first one is Dil-E-Nadan directed by Gajendra Ahire, based on Mirza Galib’s ghazal of the same name. It tells the story of classical singer Padma Bhushan Nirmaladevi Indori (Neena Kulkarni) and Sarangi player Miyaji (Suhas Palshikar), who make a living selling almonds. An undelivered letter from Delhi gives a possible hint for an invitation to perform almost after two years. The emotions expressed through the ghazal connects the pain of ingnomity for Nirmaladevi and Miyaji. Watch out for the sets and art direction of this film, as well as the screenplay and crisp dialogues by Gajendra Ahire. Neena Kulkarni and Suhas Palshikar are top notch in this one.

This is followed by Viju Mane’s Ek Hota Kau based on Saumitra’s poem by the same name. This one starts with Swapnil (Kushal Badrike) who is called ‘Kavala’ (due to his dark complexion) jumping from one building to another on a daily basis to catch the glimpse of his love Paakali (Spruha Joshi). Paakali likes him too, and throws hints at him, but our mechanic hero thinks he is no match for her due to his dark complexion. Several scenes show crows cawing at each other – this is a metaphor for the hero but it becomes repetitive. This film rides on Kushal’s excellent performance.

The third film Bail directed by Girish Mohite is based on Loknath Yashwant’s poem. Panjab (Mangesh Desai), a cotton farmer from Vidharba, comes to Mumbai to participate in a rally that’s protesting against prices given to cotton farmers. He lands up in a shopping mall and sees the prices of cotton shirts being sold – this frustrates him and he agonises over farmers not getting their dues. He stays back to work hard and earn money, so that he can clear off his debts. The end scene of this film brings a lump in the throat. I loved this take on insensitive urbanisation and pathetic conditions of our farmers today. Mangesh Desai’s performance and dialogues by Abhay Dakhane are the highlights of this film.

The final film is Mitraa, directed by Ravi Jadhav, based on Sandeep Khare’s poem and Vijay Tendulkar’s story. This one is in black and white since the plot is set in pre-Independence India. Student Saumitra (Veena Jamkar) lives in a hostel in Pune. Vinayak Joshi (Sandeep Khare) is her best friend who has romantic feelings for her, which he expresses in a letter; however, Saumitra has feelings for her roommate Urmila. Saumitra describes how she discovered at age 14 that she was different from other girls. Veena Jamkar has given a heartfelt performance and the direction is good, too.

Bioscope is a collection of different genres and human emotions woven through four different movies which are unrelated; however it keeps the audiences engaged. Don’t miss the Bioscope song sung by Raghuvir Yadav in the end credits.

One Response to Review: Bioscope