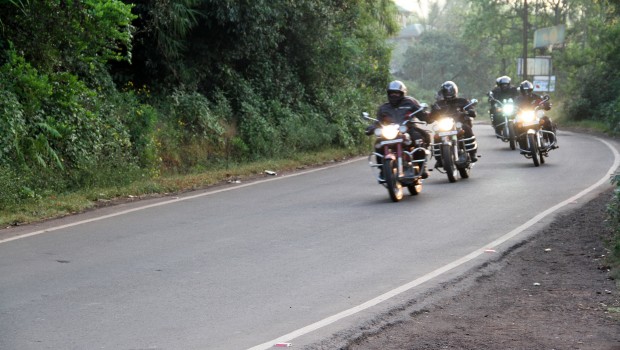 This gang of bikers does charity on the go – if you’re a serious biker, you’re free to join in.

Admit it, the moment one says the word ‘biker’, the immediate image in your mind is of a tough, tattooed dude, weaving in and out of traffic with practiced ease in the day, and burning up the roads in a death-defying race on the night’s empty roads. Bikers race each other, they drive when they’re drunk, they drive rashly…in short, they don’t follow a single road rule.

But a bunch of bikers that do charity? Drive within rules? Never drink and drive?

This is a city-based group of serious Royal Enfield bikers that was started last year by three bikers – Gurinder Singh, Sameer Balakrishnan, Deepak Ananth and Vineet Rajan, with the twin idea of combining responsible, safe biking with helping society. Speaking to The Metrognome, Deepak (35) said, “The three of us have been riding for about 15 years now, so we decided to form a club for like-minded bikers who ride in our style. We do charity rides, because our core philosophy is that we should give back to society in some way. And when we started the group, we wanted to break the stereotypical image of bikers that people have, and replace it with that of a serious, responsible person who rides hard and follows the rules.”

So much so, Deepak says, that when the group is on a ride, the ‘captain’ of the team ensures that nobody goes near their vehicle after drinking. “If we stop at a resort for the night and want to drink and party, the bike keys are handed over to the captain or a teetotaller in the group, who does not let a single drunk person near his bike,” he explains.

No need for speed

“Our rides are unique, with a concept that is well thought of,” Deepak says. Each ride is planned at least three weeks in advance, including the routes, timings and stopovers. Rides are done over weekends, and are characterised by long, typically hard riding at a maximum speed of 70 kmph.

The Bisons celebrated their first anniversary in September this year with ‘Red Bums’, a 24-hour, night-only ride. “This was an endurance ride for 1,000 kilometres,” Deepak says, adding that none of the bikers ride without helmets and jackets, and each bike has a crash guard. “We ensure that at least 40 per cent of the ride goes towards charity. We ride within speed limits, the captain for the group ensures that nobody is left behind, and driving rashly or after drinking is a strict no-no.”

The initiation into the group is no cakewalk – you have to echo the group’s core values and undergo some tests. “Once a person applies to us for membership, we call him/her and have an informal meeting. We ascertain some basic things: does the person do drugs, does he drink and drive, what speeds he/she normally rides at. Then the person has to do five overnight rides with us over a period of one year,” Deepak says.

Two overnight rides later, the potential Bison is given access to articles on biking and the group, related information and he/she is involved in decision-making for future rides. “After five rides are complete, the person is given a Bison T-shirt, and a dog tag that lists the person’s basic details and blood group,” Deepak explains.

A rising number of women are enrolling in the group, he says, and several women also go riding with their spouses. “We have a mix of people joining us. There are entrepreneurs, doctors, dieticians, graphic artists. Even Aditya Raj Kapoor (the late Shammi Kapoor’s son) rides with us. Our youngest Bison is 21, our oldest is 59 years old,” Deepak says. In a year, the group has 70 members and 25 more are in the process of being initiated into the club.

The next charity ride

On Sunday, December 23, 50 Bisons will ride from Bandra Kurla Comples to Assisi Bhavan, Goregaon, to spend time with the senior citizens living there. The initiative is called ‘Bisons Serve’. 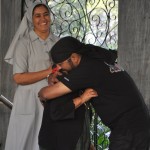 “We had been there last year, but we didn’t have enough funds to carry out our plans  then. This year, we have appealed to each member to contribute Rs 500, and we are planning a Christmas surprise,” he explains. Of the money thus pooled in, the group will purchase toiletries that will last the female inmates a year. “A Santa Claus is going to ride with us, and we’re also working on getting a carol group. There’s a Christmas tree as well. Besides this, we’ll be spending the day there, and we’re carrying lunch for them which we’ll eat with them. After all, the one thing they want the most is somebody to talk to,” he says.

All bullet biking enthusiasts can join the ride on December 23. Register for ‘Bisons Serve’ on the group’s website www.BisonsRideHard.com.