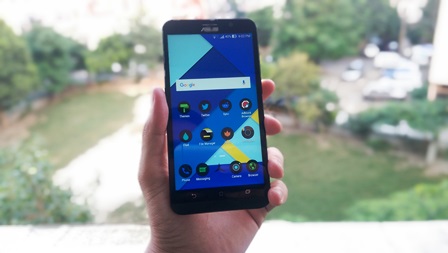 Not much has changed from the Zenfone’s last outing. It has an improved design at the back, but little else.

We reviewed the ASUS Zenfone 2 a few weeks back, and came away quite impressed with what the company offered under Rs 25,000. Now, there’s a slightly newer version of the device’s high-end model – the Zenfone 2 Deluxe. Let me put it this way, the only change here is its rear cover and storage options.

If you glanced at the Zenfone 2 Deluxe, you couldn’t tell it apart from the original Zenfone 2. With its blockish build and physical buttons, Power/Lock key at the top, brushed aluminium chin, rear-facing volume keys, there really isn’t much changed here. What is definitely different is the multi-face prism-like rear cover (see image below). The back feels really nice and is the standout feature in the phone. 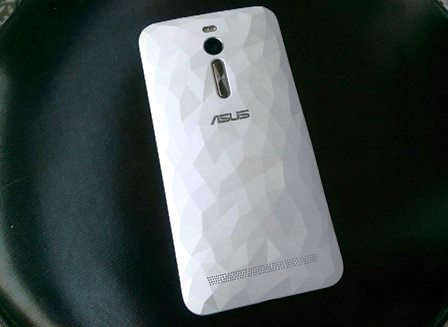 In fact, this multi-reflecting (Blue and Green) White back was the only thing people asked me about when I was using the device. The Zenfone 2 Deluxe weighs about 170 grams, but isn’t slippery, though certainly not a compact phone.

Let me tell what’s better in the Zenfone 2 Deluxe over the Zenfone 2, as there isn’t much changed here, and if you want complete lowdown in the device, you should check our full Zenfione 2 review.

Screen. The screen is the same 5.5-inch full HD panel, but this one seems a little brighter with same colour sharpness and accuracy. It’s good and works well for images and videos. For the loudspeaker on the back, it still has the same average output that does an okay job for videos and games.

Camera. The camera performance, too, is a lot like the Zenfone 2 Deluxe – detailed, colours are quite sharp, but lags behind in low-light and macro shots. Though I did find the camera app to be a little quicker to take a shot in case of the Zenfone 2, the difference isn’t much. The device has a 13 MP rear camera, and here are a few sample images.

Battery. The battery performance was slightly short of the Zenfone 2 with the average being 14 to 15 hours. There’s a 2A charger bundled with the phone that charges it up in a little under two hours (0-50% in about 40 minutes).

Software and performance. There’s an Intel Z3580 chispet in place(2.3 GHz quad-core processor, PowerVR G6430 GPU) coupled with 4 GB of RAM. It runs on Android 5.0 with ZenUI on top. The overall performance on the phone is satisfactory. It handled games like FF Legacy and Real Racing 3 quite well, as there weren’t any frame drops or stuttering during playing. The phone does warm up a little near the dual tone flash, but not to an alarming extent.

Extensive customization options – icons packs, themes, icon text colour, double tap to wake and lock – are present here. Plus, four dozen ASUS apps are also present, something that really needs to be cleaned up ASAP. The only place it seemed to struggle a little was the recent apps list where scrolling isn’t as smooth and sometimes the selected app would take a while to load up, a known Android Lollipop issue.

All in all, it can perform most tasks well and hardly lagged during my usage. I used the 64 GB model that had about 54 GB of available space, which you can further expand using a microSD card. There’s also a 128 GB model priced a bit higher (and 256 GB in select markets).

It’s clear that ASUS really had one thing in mind for the Zenfone 2 Deluxe – the same content, but new packaging. It would be fair to say ASUS has done well with it. If you want a phone with a rear that is rather not boring, you should consider this phone that has a similar performance and experience as the original Zenfone 2.