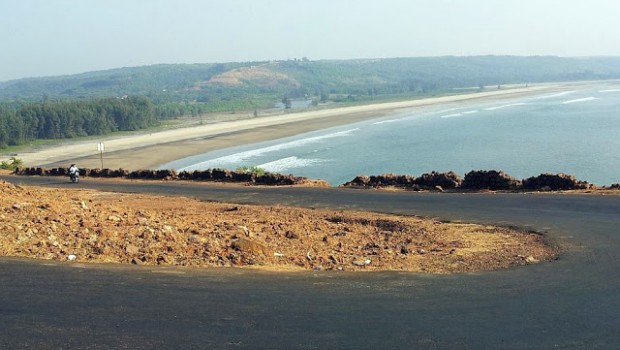 On a sunny Saturday morning, my friends and I headed out of Mumbai to what was to be a fun-filled road trip to Ganapatipule, a small town on the Konkan coast of Maharashtra. Approximately 380 km from Mumbai, Ganapatipule in Ratnagiri district is most famous for its beachside swayambhu (not carved by human hands) Ganapati idol temple.

Ganapatipule, as the rest of the Konkan coast, is home to one of the most scenic beaches in India, still relatively untouched by commercialisation. Ideally, make Ganapatipule your base and visit nearby areas which take about half a day of travelling.

A good way to begin your stay in Ganapatipule is to visit the Ganapati temple that houses the deity’s idol, believed to be over four centuries old. As we stood in line for darshan, I couldn’t but think: “Pehle dev darshan, phir ang pradarshan…” Loosely translated, this means: first worship God, then display your body. For the uninitiated, it might interest you to know that the temple is literally on the beach.

There’s not much to do in Ganapatipule itself, except for a few water sports at certain points along the beach. If you’d like a flavour of old Konkan, do visit the Pracheen Konkan museum. The local girl/ woman guides are a cheerful lot as they run you through a rather poorly put together make-believe world. For food lovers, Ganapatipule’s numerous eateries serve up a delectable fare – chicken, fish and prawns – of Malvani cuisine.

Drive down towards Malgund four km away and enjoy breathtaking views of the Konkan coast. Further north, about 35 km away, a must-see is the Jaigad Fort that sits majestically on a cliff along the Arabian Sea. While the fort itself is in ruins, its walls still stand and you can enjoy a breathtaking view of the countryside.

A trip to Ganapatipule should include a day trip to Ratnagiri city, the district capital which is about 25 km away. The drive down south to Ratnagiri will take you through sleepy coastal villages and a truly breathtaking seascape. At two points along the drive, the cliff-side suddenly breaks to give you stunning views of the Konkan coast – clear blue waters and sandy beaches lined with palm and mango trees. Stop awhile; enjoy kokum sherbet and bhel made by locals on the cliff-top shacks and take in the sound of waves gently rolling in.

Ratnagiri is the birthplace of Keshav (Lokmanya) Balgangadhar Tilak, who demanded swaraj (self-rule) from British colonial rule. Tilak’s two-storied, tiled-roof home stands in a quiet by-lane near the main market. It is now a museum. Thibaw Palace, home of Thibaw Min, the last king of Burma (modern day Myanmar) who lived in exile here is a sad remnant of what was once a flourishing dynasty. Incidentally, just two days before our visit, on December 22, 2012, Myanmar President Thein Sein visited Thibaw Palace and the King’s tomb. In doing so, he became the first Myanmar leader to visit the tomb of his country’s last King, who was exiled to India from Burma more than a century ago.

Just off the main road from Thibaw Palace, opposite Gandhi petrol pump is Amantran, a local restaurant that serves authentic Malvani cuisine. For seafood lovers like me, the prawns and the pomfret fry is a must-have. Go for one of their thali options and you’re in for a treat! Amantran also bottles their own aamras, so make sure to buy a bottle or two.

The highlight of the drive down to Ratnagiri is most likely to be a visit to the Ratnadurga Fort, shaped like a horseshoe and surrounded by the Arabian Sea on three sides. Built by the Bahamani kings, it was captured first by Adil Shah of Bijapur and then Shivaji, in 1670. It is here that Sambhaji went into hiding after escaping from Aurangzeb. The fort has a lighthouse that guided ships as far as 15 km away from the coast and gave a strategic advantage over any attacks from pirates and other enemies. Today, the crumbling remains of this majestic fort are a poignant reminder of a rich historical past. While at the fort, don’t forget to pay obeisance to goddess Bhagwati whose temple is here.

As you head back to Mumbai, take a small detour through narrow village lanes at Sangameshwar and head to the Karneshwar temple, a beautiful stone carved temple dedicated to Shiva. Over 1,600 years old, built by Karma of Kolhapur, it almost transports you to another era.

Ganapatipule will give you some much needed tranquillity from the hustle-bustle of city life. Don’t come here with an agenda or a to-do list. Sleep late, enjoy lazy walks along the beach or find your favourite cliff-top vantage point and take in some breathtaking views. And through it all, don’t forget your sunscreen.