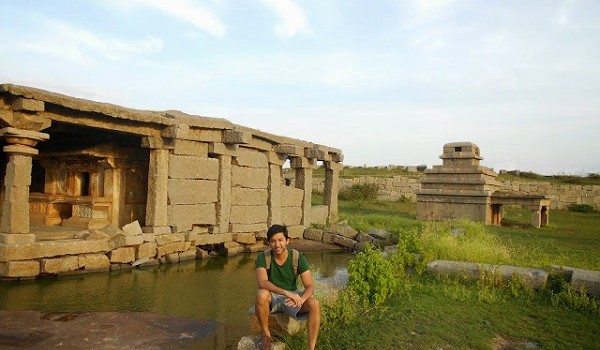 A Mumbaikar adds to his list of solitary India travels with a trip to Hampi, land of fables and architecture. 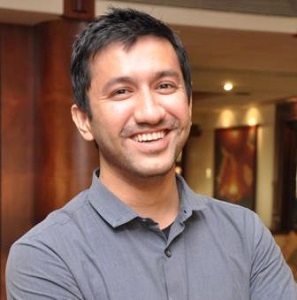 The ruins of Hampi, part of the ancient Vijaynagara Empire and a UNESCO World Heritage site, have always fascinated me. Last year, a trip over the long Independence Day weekend came to naught when my friend in namma Bengaluru decided to go out of town with her family. Thankfully, this year, over the long I-Day weekend (August 14-18), I finally found myself among the magnificent ruins of Hampi.

After spending a relatively chilled out day in Bengaluru eating home-cooked fish and taking time out to watch a movie, I finally made my way to Majestic (bus stand). The traffic drove me insane, incessant rain added to my irritation and the fact that my bus was delayed for over an hour added to my woes.

The best was yet to come. The ignoramus that I am, I had booked a window sleeper, which meant I was sleeping next to a stranger with less than 10 feet (or maybe lesser) head space. There was little room to sit up. The nearly seven hour journey to Hospet was uncomfortable (to say the least) thanks to the bus’s constant swaying and bumping on an uneven road. As we neared Hospet on the morning of August 15, village after village in rural Karnataka was decked out as if for a party! Mostly, school kids dressed as leaders of the Indian freedom movement held forth as boy and girl scouts did a parade.

A 40-minute rickshaw ride later, I was in Hampi. A flood warning meant that the Tungabhadra had risen and boats were not crossing over to the Anjeyanadri side where my resort was. As I walked through the bazaar, the Virupaksha Temple dominating the landscape, a local offered me a room. For Rs 700 a night I got a double bed with an attached toilet-bathroom, cold running water, no blankets and a solitary tube light. Beggars can’t be choosers…right said, they.

But I was in Hampi! J

A cold bucket bath and some 20 minutes later, I was ready to conquer the world. Well, almost. At the end of the small path, which led to my rooms, was a corner shop where ‘coffee amma’ sat, making endless cups of coffee through the day for locals and tourists alike, all with a smile. A cuppa later, I made my way to the main bazaar where for a meagre Rs 30 I had three idlis and two fried vadas with authentic coconut chutney for breakfast.

Since I had only two days in Hampi, I decided to hire a rickshaw to cover as much ground as I could, quickly. My driver Hanuman, a local, also doubled as a guide, though I must confess that he mumbled and that his broken Hindi meant that I really didn’t understand much. First up was the Vitthala Temple complex, possibly the grandest and most popular of the Hampi ruins, which is home to the world-famous musical pillars. The temple’s pillars have beautifully carved images from Hindu mythology and also from the time when Hampi was a trading city. Among the more detailed images are the ones of Persian traders selling horses to the local king. Along the road that leads to the Vitthala Temple, ruins of the old market can still be seen. The complex is home to one of three world-famous stone chariots – the other two being in Konark and Mahabalipuram. The chariot houses an image of Garuda, the vehicle of Vishnu. I learnt that till some years ago, the wheels of the chariot could be moved. Interestingly, not one of the many curio shops had a stone chariot souvenir.

At walking distance from the Vitthala Temple is the King’s Balance and the Tungabhadra River, where you can see remains of an ancient stone bridge that connected Hampi to Anegundi. On the banks of the river is the Purandara Mantapa, the place where the wandering minstrel Purandara Dasa stayed.

Among the more interesting structures at Hampi was the Mahanavami Dibba, a pyramidal, three tiered stone platform located within the Royal Enclosure. Built in granite, it is stunning. Each tier of the platform has sculptured mouldings in the typical Vijaynagara style of architecture. From the top of the platform, the Royal Enclosure stretches out in all directions, scattered with ruins of what were once palaces, administrative buildings and temples. Undoubtedly the temple of royal patronage, the Hazara Rama Temple is dedicated to Vishnu in his avatar as Rama. Sculpted friezes depicting the Ramayana run all around the main shrine, as well as narrative sculptures on Luv-Kush, the children of Ram, and Bala Krishna.

Given the sheer number of ruins scattered across Hampi, it is almost next to impossible to prepare a laundry list of the ones to visit. But the ones that I have written about so far are definitely not to be missed for their artistic grandeur, which is still visible centuries later.

As the sun began to set on Day One in Hampi, I made my way to Hemakuta Hill, dotted with numerous shrines and mandapas. Here, the magnificent monolithic, four-armed Sasivekalu (mustard seed) Ganesha, at 2.4 metres in height, towers above visitors. The elevated Hemakuta Hill offers a sweeping view of Hampi in all directions. At the Hill’s Sunset Point, I let my legs dangle over the edge of a two tiered mandapa and watched the world go by. I had a friendly chat with two lovely girls who were backpacking across India after completing their undergraduate degrees in Wales. They were heading home to London (damn!) to pursue their Master’s in Audiology. And my heart skipped a beat with love and longing…as I watched the sun go down on what was once the great Vijaynagara Empire.

Day Two began bright and early. I checked out of my squalid room and made my way to coffee amma’s shop. The ever-smiling ‘amma’ allowed me to keep my travel bag at her shop while I roamed through Hampi. A quick walk down the river bank and a hot breakfast of poori-bhaji later, I made my way to the Virupaksha Temple. The heart of Hampi, the temple was abuzz with visitors even at 8 am due to the long I-Day holiday weekend. Extended in the 13th and 17th centuries, it predates the Empire, has two magnificent gopurams or ornate towers that dominate Hampi’s landscape and is dedicated to Shiva and Pampa, his consort and a local deity. I was quite happy to walk through the temple courtyard, take darshan and then squeal (not literally) in joy as the temple’s resident elephant made an appearance! I love elephants, there is something about these gentle giants that captures my imagination. Quite unlike me, I waited patiently to be “blessed” – I offered a ten rupee note to the pachyderm, who promptly took it in its trunk, gave it to the keeper and then placed its trunk over my head. Truly, blessed.

I stepped out of the temple complex and took the dusty road opposite it that leads to a monolithic Nandi. Just before it, a small path to the left leads down to the river from where you can walk along its banks. At one point, the path ends turns inward into the rocky cliff side to come out under an outcrop – you’d think it’s a secret tunnel you read about in an Enid Blyton story. From here, follow the path till you come to the magnificent Achyutaraya Temple at the foot of the Matanga Hill. Sitting desolate in a vast expanse, with mandapas on either side, walk towards its imposing mahadwara. The grounds and the mandapas were home to a weekly bazaar where traders, both Indian and foreigners, came to trade their goods.

With more than half a day still left, I decided to make the road trip from Hampi to Anegundi on the other side of the Tungabhadra. Along the way, as you meander through the winding hill roads, the ruins of Hampi can be seen across the river. But by far the most stunning view of Hampi is from the top of Anjaneya Hill, where there is a temple dedicated to Hanuman, the monkey god. Now, I’m always up for a good trek but the steep climb to the temple – almost 600 steps – took the wind out of me. But the view more than made up for it!

Like I’ve mentioned earlier, it is next to impossible to describe each of the ruins I visited but there are some you just cannot miss. Some of these include the zanana enclosure, the Lotus Mahal and the elephant’s stables, the prasanna Virupakhsa (underground Shiva temple), the Lakshmi Narasimha Temple and the Krishna Temple.

As sunset came, I made my way to Hampi bazaar for some last-minute curio shopping and a quick meal at the Mango Tree restaurant. One last cup of coffee later from coffee amma, I was on the bus back to Hospet. My fondest and most vivid memory? Sitting on Hemakuta Hill and watching the sun go down on what was once the glorious Vijayanagara Empire.