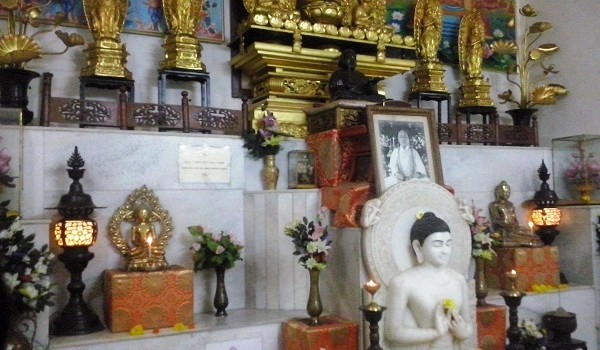 A Buddhist temple at Worli

Blink, and you’ll miss it – look out for the sublime aura of the Nipponzan Myohoji temple at Worli Naka.

Amidst the lovers waiting to reach the Worli sea face and the cars honking to go home, Worli Naka was engulfed by the flag-waving bike riders celebrating the India-Pakistan match victory in the 2015 ICC World Cup. Our search for the oldest Japanese-Buddhist temple in Mumbai on this day was met with curious glances from passers-by. I, fleetingly, remember a Japanese inscription written high on the walls of a shrine each time we passed the locality. But that evening, I was destined to experience its tranquil nature. 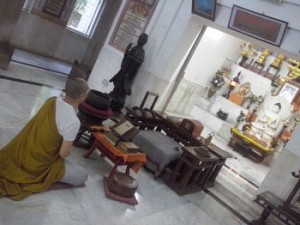 The Nipponzan Myohoji temple at Worli was built in 1952 by Jugal Kishore Birla. Legend has it that the philanthropist and Gandhian built the simple shrine on being impressed by the Buddhist philosophy imparted by a Japanese monk (Bhikhu) Nichidatsu Fuji. Fuji had come to India to fulfill and gain knowledge from the prophecy of a 13th century monk named Maha Bodhisattva Nichiren.

Nichiren had said that the ultimate salvation for all humanity lay in the western land (according to Japan’s position on the map) known as India, the place where Buddhism originated. With an all-welcoming attitude, the temple is witness to the changing nature of Mumbai.

Once inside the premises, I heard the chant of ‘NaMu-MyoHo-Renge-Kyo’ mantra and in a second, all noises faded. The stress of a sleepless afternoon didn’t disturb me, as I took in the beautiful facade of the simple temple. It was evening time and we saw the resident monk, Bhikshu Morita, sitting and softly chanting the lotus mantra.

With just the two of us in the temple, i.e. my partner and myself, we explored the area leisurely. Quite a few clippings of the temple’s narrative along with 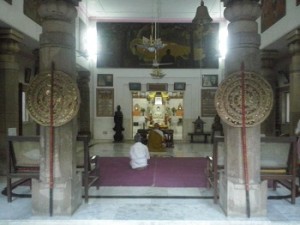 Morita’s younger days are showcased in one corner. But if you glance up, you will be taken on a tour of the story of the Buddha – painted with vegetable dye.

While the main statue of the Buddha is made of marble and placed right in the centre of the temple, one will get a peek of other Buddha statues in different poses. One standing under the Bodhisattva or the Tree of Enlightment, another sitting in meditation, with another lying horizontally.

What catches the eye is the huge Japanese drum, being played in sync with the lotus mantra. There were two more devotees, who played to the beat on smaller tennis-shaped rackets. The hand-held rackets had the lotus mantra written on them.

As we went ahead, the monk urged us to silently go inside the main chamber and pray to Lord Buddha. We bowed our heads and took the prasad. Then we read about the birth of Buddha as Prince Siddhartha and saw a few postcards from different countries with wishes for the New Year.

And slowly, just like the setting sun we made our way out and back to the busy street. But this time the rush in our steps was not there. Just the calmness of our mind accompanied us.