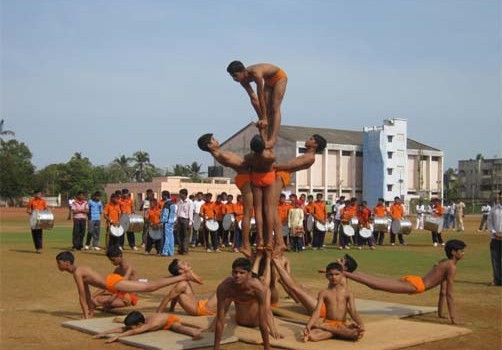 Mallkhamb is great for you

Cheap, multi-effective and with amazing curative properties for the blind, mallkhamb is an all-body workout that heals the mind, too.

The evening is drawing to dusk, and Shivaji Park is beginning to slow down. Evening walkers are resting, talking, taking in the sight of other walkers stop as well. But in one corner of the park, a run-down building is buzzing with life. There are two wooden poles on which boys shimmy up and down. A few feet away, young girls snake up a stout rope suspended from the ceiling, holding the strangest of contortions for a few breathtaking seconds.

Away from the activity, Uday Deshpande, the chief mallkhamb coach at the Samarth Vyayam Mandir and the honorary general secretary of the Mallkhamb Federation of India, is at work in his tiny office. The Mandir was set up in 1929, and has trained scores of Indian and international sportspersons and yoga practitioners on its simple floors – teaching them mallkhamb, rope mallkhamb, kho kho and kabaddi as well.

But isn’t mallkhamb as difficult as it looks? “Of course it is,” Uday laughs (he’s been a practitioner since he was four!). “It’s simplicity lies in its degree of difficulty – it’s not just about climbing a pole and balancing on it. It takes every ounce of strength and concentration to perform the simplest of poses,” he explains.

The thing that ups the sport’s difficulty level is the fact that mallkhamb is an aerial sport. “A person’s fear complex increases the higher up he goes from the ground, and this is excellent for increasing focus,” Uday explains. “It takes a special ability to climb the pole against gravity or hold one’s body in a rope.”

Interestingly, the sport has several curative properties for the visually-challenged. “I teach at three blind schools in the city, and the results of mallkhamb on these children are fantastic. Since they are visually-impaired, they are conditioned to be careful, to not do anything without assistance. This makes them inactive and leads to a host of health issues.” He says that after practicing mallkhamb, which they can do without assistance, their concentration goes up, and their appetites improve.

“Several of my blind students later told me that they had started doing better in their studies after taking up mallkhamb,” Uday says. “Everybody should take it up – it costs next to nothing to set up (you just need to invest in a pole with a stand), and it offers a full-body workout like no other sport can. We prefer that people start learning it when they’re very young, but at our Mandir, we have even an 81-year-old man coming to learn!”

A heartening development is that slum children from Dadar and nearby areas are enthusiastic learners of the sport.

Mallkhamb originated in Maharashtra in the 19th century, during the reign of the Peshwas. Interestingly, a mallkhamb contingent represented India in the 1936 Berlin Olympics, wowing Herr Hitler himself. Currently, 29 Indian states participate in mallkhamb competitions at the national level.