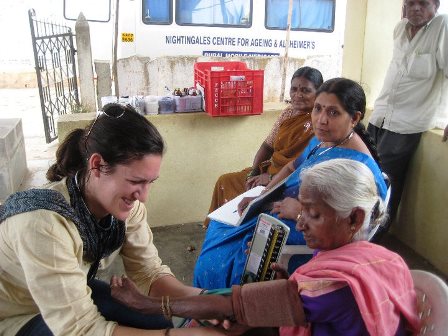 The problems of the old in Incredible India

An American medical student writes about interacting with seniors in Mumbai and Bangalore and the many insights into Indian life.

India is big, crowded, and changing faster economically and socially than it can seem to keep up with. The largest democracy in the world with over one billion people, it is completely overwhelming and exhilarating, but there is also a prevalent warmth and hospitality within the people wherever you go.

India’s history is as rich and colourful as it can get, with hundreds of different conquerors and border changes, the famous story of independence led by Mahatma Gandhi, and evidence of it all remaining in the temples, statues, and preservations of countless historical sites. The culture is heavily influenced by religion and their daily rituals influence almost every part of the lives of the Hindu people I interacted with. Muslims and Christians, along with Sikhs, Buddhists, Jains, Jews, and Zorastrians also are seen openly practicing their religions, and all living in relative peace and symbiosis with each other. 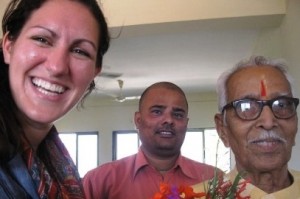 Robin Reister with seniors in Mumbai

But when talking to the locals about what is changing, especially from the elderly generation, you hear about the huge social changes taking place. The breakdown of the Indian family model, which used to be comprised of a large household with all generations, is now becoming nuclear and leaving many from the silver generation without a home.

My rotation focussed on the health and social issues of the elderly population in India. I worked with a multi-faceted medical NGO in Bangalore, the Nightingale Trust, whose realm includes home medical care, an inpatient dementia care unit, adult day care, and rural medical visits amongst other things.  I also worked with a newer NGO in Mumbai known as Silver Inning Foundation which uses social networking and media to help address multiple human rights issues and needs of the elderly. My goals in this rotation were to learn about the health and human rights issues involving the elderly in India and compare them to the USA’s, share my knowledge and ideas with the Indian people I work with, and use my connections and what I learned in the future in some way to help address these and similar problems.

Before leaving, I had some grasp on the issues affecting the elderly. I had heard that there were rising amounts of elderly people due to increasing life expectancy, and little infrastructure to support them. Also I knew rates of diabetes were on the rise. I wanted to explore the issues from a medical and human rights perspective, as are my interests. On arriving, I found that these things were true, and more. Again and again I heard the stories of children abandoning their parents, or moving away to the US. There was no Government support to help them finance their daily life. Rates of depression have increased in the elderly as an outcome of the changing family structure too.

The NGOs I worked with were helping to address these issues. I was a part of these NGOs as an observer and short-term worker. I think my presence benefitted the people I interacted with by sharing my knowledge of how the elderly are treated in America and by showing my support of the activities and the people in need.

Tomorrow: ‘Do not complain about health issues’ is the Indian’s mantra.

Robin Reister visited India in 2011. Today, she is a practicing doctor in a hospital in New York. ‘Grey Space’ is a weekly column on senior citizen issues. If you have an anecdote or leagl information, or anything you feel is useful to senior citizens, caregives and the society at large, feel free to get it published in this space. Write to editor@themetrognome.in or on Facebook at www.facebook.com/Themetrognome.in and we will publish your account.