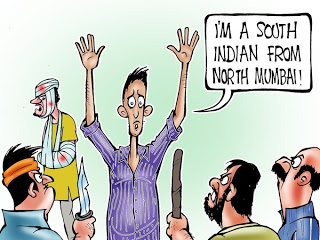 The Partisan of India

Prashant Shankarnarayan muses on the North-South Div(why)de, and wonders why history books omit South India from the Indian freedom struggle.

The observation: A good-hearted Punjabi and a funny radio host, he just blurted it out. However, his jovial comment reflected a deep sense of prejudice hosted by many compatriots. He is an innocent by-product of an indifferent education system that made us believe that South India did not contribute anything to the freedom struggle, and the North was where all the action occurred. So here is my response to that lame comment but before that:

Is this article about freedom fighters? No, because I have no moral credibility, right and intention to even comment on them just because I happen to sit on a chair with a backrest and know how to operate a laptop.

Then what’s the fuss about?  Because although North India saw more bloodshed because Punjab and Bengal were divided amid political machinations, and considering that Kolkata was the erstwhile capital before Delhi took over, it still doesn’t mean that the southerners were sitting around eating appams and drinking payasam all day while the feisty North battled long and hard.

This is just a humble rumination on a few known but not often-discussed facts which, I believe, need to be included in our history books and conversations, so that our institutions stop manufacturing Northies and Southies, but Indians.

No, it wasn’t the 1857 one at Meerut. Actually, the first one occurred on July 10, 1806 at Vellore. The Hindu and Muslim sepoys of the Madras Army protested against army rules that hurt their religious sentiments, and were also fuelled by a desire to put an Indian prince on the throne. The mutiny broke out and the sepoys killed many British officers, raised the flag of Mysore Sultanate at the Vellore Fort and declared Fateh Hyder as the king before the rebellion was crushed by the rulers in a day.

Who was the first Indian queen to take on the British? The mind conjures a brave and beautiful Rani Lakshmibai seated on a horse, with her infant boy tied around her waist, wreaking havoc on the battlefield and dying a heroic death in 1858. They called her the most dangerous of all Indian leaders, yet there were other queens who took on the might of the British long before the battle of Jhansi. Chennamma, the ruler of Kittur in present day Karnataka, fought with the British East India Company for the same reason as Rani Lakshmibai would later fight for – to ensure that her adopted son remained her heir. The courageous queen was captured and later died in prison in 1829. As for Velu Nachiyar, the queen of Sivagangai, she was amongst the first ones to use a human bomb way back around 1780. She even created a women’s army to face the British soldiers and named the unit ‘Udaiyal’ in honour of her adopted daughter, Udaiyal, who died detonating the British armoury.

One of the many revolutionaries

This patriot, affiliated to a nationalist outfit, assassinated an English officer and eventually committed suicide by shooting himself to evade arrest. Before you say Chandrashekhar Azad, let me tell you about Vanchinathan. Born in Shenkottai, he was a member of the Bharata Mata Association and shot dead the district collector of Tirunelvelli, Robert William d’Escourt Ashe – almost 20 years before Azad’s martyrdom.

The list can’t continue further as the article runs the risk of being branded as a history lesson by a rank amateur. But it is an earnest appeal by a layman to stop viewing Indian history from a partisan North Indian perspective. It is this sheer ignorance that makes a random North Indian guy rebuke a random South Indian guy just because the former doesn’t know even an iota about South India’s contribution to Indian independence. And it is the same ignorance projecting in different ways that very subtly sows the seeds of alienation fuelling the Aryan-Dravidian or Hindi-Madrasi undercurrents that we see in religion and politics.

No one knows why our educators decided to chuck quite a bit of South India from history books, but as a result, people like my friend have created their own incorrect opinions about the freedom struggle. More importantly, my Punjabi friend thought that he represented all the freedom fighters from the North just like I, for him, represented all the so-called docile South Indians. What matches his pathetic gleeful ignorance is the equally rigid Dravidian politics of certain parties from the South. As commoners, it is definitely better to erase each other’s ignorance rather than feed on it like Dravidian netas.

I believe that the honourable frogs who set history curricula should jump out of their North Indian wells and take a dip in the Indian Ocean to familiarise themselves with the adjacent Indian land mass. Lala Lajpat Rai and Tiruppur Kumaran both held on to flags, at different locations and a different time, even as the police assaulted them, and both eventually succumbed to injuries. I asked my fiancée, and as expected, she had studied about the former leader in school but knew nothing about the latter. Worse, she accused me of being a defensive South Indian after reading the first draft of this article. No surprises, considering she is a North Indian.

Prashant Shankarnarayan is a mediaperson who is constantly on the lookout for content and auto rickshaws in Mumbai. This column tries to dissect situations that look innocuous at the surface but reveal uncomfortable complexities after a thorough post mortem.

4 Responses to The Partisan of India