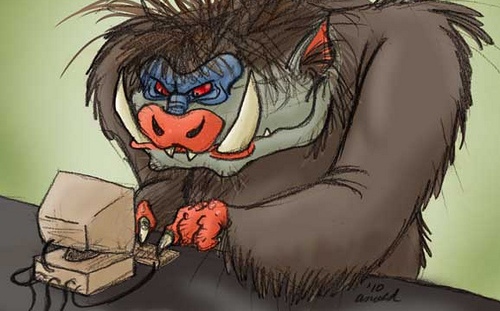 Freedom of speech and all is okay, but you are a troll

Most people commenting on online content should not be allowed anywhere near the Internet even if it’s their dying wish.

Look, I’m all for freedom of speech. Much like I am all for power naps, provided the nap doesn’t span a period of four hours on a day when I have the choice to either hand in that news report or die.

Freedom of speech is great. It’s wonderful. Heck, who doesn’t want to say exactly what they want, without fear of being bunged into jail wearing long hair and black kurtas, shouting slogans for the news cameras? I, for one, am the absolute master of saying what I want, when I want. If I am on the treadmill next to yours and you’re ponging of several ripe guavas, I will make a face and pointedly use another treadmill. If you ask my honest opinion on a piece you’ve written and it, well, sucks, I won’t say it sucks, but I will say that it could do with not being published at all.

And I’m completely okay with you making a face and pointedly using another treadmill if I’m ponging of ripe guavas.

The problem starts when you give me unasked-for advice. The problem gets bigger when you shout out that advice on a public forum, and make specific references to my other job as a hooker (when I’m not pimping stuff through my articles, that is), my genitals, my complete lack of ethics as a reporter (‘These media people are all paid bastards!’), my choice of profession (‘Who made this bitch a journalist? These media people are all paid bastards!) and so on. It gets worse if the story is about the Congress party, even if you’ve written a completely neutral story about Rahul Gandhi’s recent visit to Mumbai.

As to this last, the headline the editors gave the story was a rather unfortunate one. Describing Rahul’s Mumbai visit as an effort to get demoralised Congress grassroots workers together as ‘Rahul digs deep to revive Congress in Maharashtra’ (or some such. They later changed the headline and deleted the offending comments) was a most unfortunate choice of words, both for Rahul and me. Before the website flagged down the offensive comments, several smartasses had referred to how deep Rahul had dug to get this particular reporter to write about him. And that was just the usual tone of the comments posted.

The worst was when I interviewed ACP Vasant Dhoble (he of the hockey stick fame), and expectedly, the story was commented on a lot. However, several of the comments, which showed an astounding faith in Dhoble’s style of functioning (‘Corrupt, sleazy Mumbai needs this kind of brave cop!’), ganged up on me in the worst way possible. Sample some of the feedback directed at me:

‘This Vrushali is sick and needs to be rescued’.

‘This journalist has written this article she is a prostitute whose dhanda is affected by the actions of this zealous and noble officer.’

‘These media people are angry because they go to drink and do sleazy activities after work, and now Mr Dhoble has stopped it. I salute you sir!’

‘Why this Vrushali Lad has written this article? What is her problem? Her parents did not teach her any morals, that she has to write all this nonsense about an upright officer who is doing his job.’

And to think, the interview itself was neutral to the point of being sterile. This time, I yelled at my editor and they had all the comments screened and the worst ones removed.

No, I love feedback, I really do. It gives my work a sense of validation. I like it when readers write to say that they found a particular story lacking in depth, or if they have a new angle to suggest. It helps me write better, and keeps me from becoming complacent.

No, I hate it if you’re going to sit on the other side of my computer screen, one hand typing and the other in your pants, as you come to your own profanities while you imagine me to be your worst/most desirable idea of sleaze in a skirt. I know, when you’re writing off my morals and my character and my upbringing and my ethics, that you’re wondering just how to get into my pants. Worse, when you’re actually accusing me of being an idiot who writes articles for the Congress after sleeping with Rahul Gandhi and taking money from him, your pea-sized brain is busily conjuring up images of a Casanova-style Rahul Gandhi in a roomful of paid women journalists, and nobody’s wearing anything.

I notice that these trolls restrict themselves to talking only about brain size when they’re abusing male journalists.

Dear abusers, most of you are idiots. Most of you are incapable of stringing two words together. Most of you learnt your spellings from the SMSes you send and receive, lolz. Most of you are prize losers with miniscule dicks that need constant validation by targeting people on the Internet. Most of you are furious that you are not getting any, that you only have the Facebook profiles of unsuspecting women to come to. Most of you are so terrified of actual bodily harm that the only time you’ll ever shout abuse at anyone is through a comment thread, and even then, you’ll sign in as Salman Khan.

And most of you, firmly believing that any writing about the Congress party is paid/financed by the Congress/published after several sexual favours by Rahul Gandhi, are vile monkeys who have not had a coherent opinion since the beginning of time. You, particularly, should be locked together in a room and made to watch Manmohan Singh speeches for a year.

You choose the Internet to be blunt and funny. How safe and macho you must feel, hiding in your closet and gleefully typing out all the expletives you learnt from your father. How knowledgeable, how profound your observations must sound to you, as deep as your knowledge is about the workings of the media and its lack of ethics. How closely you must have watched us journos go about our business, how skilfully you must’ve stalked us, if you know that we work only in exchange for money from politicians and make a living off kissing ass.

Yes, I love freedom of speech, and I use it within bounds. I disagree with the message, not its creator. But you, despicable waste of space that you are, even now you’re typing, ‘This Vrushali is a bitch with loose morals.’

Vrushali Lad was a freelance reporter who spent several years pitching story ideas to reluctant editors. Once, she even got hired while doing so. She can be contacted at vrushali@themetrognome.in.

2 Responses to Freedom of speech and all is okay, but you are a troll

Leave a Reply to wiedza i życie Cancel reply