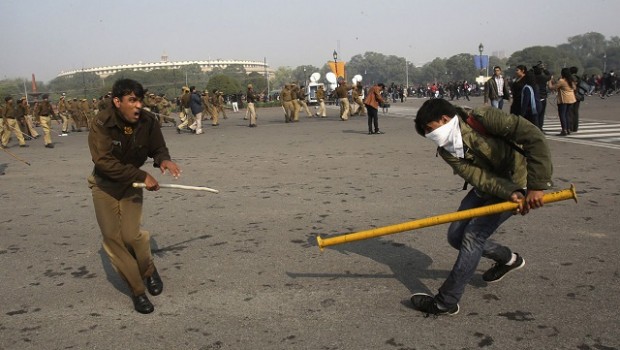 We’re currently seeing a weird kind of policing, where those trying to help are harassed, and criminals are allowed to get away.

The problem in our country is that nobody ‘dismisses’ a Government employee. At the most, they are only suspended.

We fear those people that belong to a policeman’s family, or a politician’s, or a Government babu’s. However, recent events have shown that if we must fear policemen, it is not because they can instill fear in us simply by being policemen. The rape and torture of a five-year-old in the country’s capital was followed by the terrifying news that the policemen who the girl’s parents approached for filing an FIR tried to dissuade the parents against filing a complaint. Instead, they asked them to accept Rs 2,000 as a bribe for keeping quiet about the incident, and to go home and thank the lord that their daughter was still alive.

No wonder nobody fears the police in our country. The cops don’t want to file an FIR, choosing to let the biggest of crimes be swept under the carpet so that they are spared the trouble of having to investigate them. They can stoop so low as to offer bribes to victims’ families. And if that isn’t enough, they also push and slap protestors.

And for all this ‘ethical’ policing and ‘sensitivity’, what does an errant ACP get? At the most a transfer, after a suspension.

I am writing this piece from Delhi. A car picked me up from the airport, and I soon started chatting with the driver of the car. This driver was of the opinion that the Delhi Police was in a much better shape 10 years ago, because the Force knew how to control people without resorting to outright assault. “But now they are no better than criminals,” he said. “After the Delhi rape (of December 2012, when a medical student was gangraped in a moving bus and left to die on the street), the police started checking vehicles at night. They said it was to increase security. But the checking was done to make money – you had to pay Rs 200 if you wanted to leave without any harm, whether you had done anything wrong or not.”

I asked if Delhi wasn’t insensitive as well, as people didn’t stop to help the rape victim and her male friend. The driver said, “People didn’t help because the police are lazy.” I asked him what this meant. He said, “If anybody had helped, the police would have caught hold of those people who brought them to the police station and harassed them, as they would have to start an investigation.”

What an idea, to think that people are unwilling to help victims of a crime because the police will make them suffer for helping! Of course, this is true of most States in India – how often have we heard cases where people did not report crimes because they feared the police harassing them unduly?

What kind of reverse policing are we living with?

It is an understatement to say that the image of our police needs a drastic makeover. But there also have to be shifts in other duties the police carry out routinely – first and foremost, they should be taken off security duty for VIPs and politicians, because their first duty is to protect the common man. And who says that to implement the law, the policeman has to be a rude, unnecessarily tough person? Our cops need to be friendly, approachable and willing to help in any situation.

Our Government and our policemen have forgotten that the first step in a democracy begins with a strong police force that can effectively ensure that the country’s laws are being followed. Most importantly, there should be the harshest punishments for those cops who are found guilty of dereliction of duty – a mere transfer for a cop offering a bribe to a victim or attacking a civilian, is a laughable ‘punishment’.