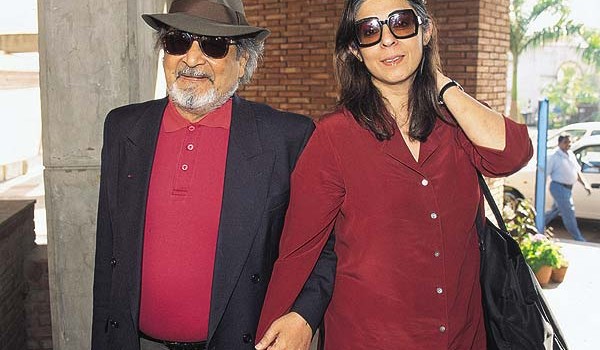 When I heard about playwright and actor Girish Karnad’s tirade against writer VS Naipaul, I was a little amused, and I must admit, a little happy that somebody had finally spoken out so vehemently against him. But more on that later.

I first met Naipaul and his wife Nadira at Khushwant Singh’s home a few years ago. What had immediately struck me within minutes of the meeting, was the lady at the writer’s side. Nadira seemed to exercise total control over her husband, as though some severe insecurity was sapping her, making her hover over him constantly. She seemed overpowering, almost posing a  hurdle to any conversation between her famous husband and me.

And this pattern was repeated every time we met in subsequent years. When I next met them in around 2004, Naipaul had recently done the unthinkable – at least, unthinkable to the sane and  sound of mind in this country. From some semi-political platform, he had given a clean chit of  sorts to the destruction of the Babri Masjid. A Lord giving his approval to destruction! I was astounded.

And so I was dying to throw some unsettling questions at him when we met right after his famous pronouncement, but once again, Nadira swooped in and started hovering around. No sooner had I sat on the chair placed next to him, than she took hold of another chair and sat down on his other side. Though the host for the meeting tried to seat her elsewhere, she shook her head stubbornly and immediately put on a mothering act; serving daal and fried bhindi into a bowl together with salad and curd on his plate, she repeatedly kept asking him whether he wanted this or that.

As she got up to fetch a drink, I’d started the conversation with him, commenting on how little he was eating. “After a certain age, one shouldn’t eat much. I have begun to eat little,” he  said, sounding a little depressed.

“And what are you writing these days?” I asked.

“Nothing, really…after a certain age it gets difficult to write.”

“But isn’t writing an ongoing exercise?”

“No, it gets difficult to write after a certain age. I suppose if I was doing business, I would have carried on, but with writing it isn’t easy.”

“Are you planning to switch over to politics? I ask because you aired, rather too blatantly, some Right wing views recently?”

“But didn’t you travel to Nashik?” I went on. “And it is said that your longish stay at the Maurya Sheraton’s luxury suite was sponsored by a certain political party?”

“Yes, I did travel to Nashik…and here in New Delhi, I did go to the  BJP office headquarters. What’s wrong if a writer goes to a political party’s office and interacts with their workers and leaders?” he spluttered.

I asked my next question. “Shouldn’t a writer not support blatant destruction? Of structures, human or otherwise?”

He’d looked rattled, cornered. And as if out of force of habit, he started looking around for an escape route, somebody to pamper and protect him from fresh onslaughts. And the escape route appeared just then – Nadira was back and seated in the chair she had briefly vacated. Any further queries directed at Naipaul were then answered by the ‘Back off’ look on her face.

He couldn’t answer any more questions, giving in completely to her ministrations with a lopsided smile. I stared with amazement as she overstretched herself, putting up a big show of protecting her husband in a laughably pretentious way.

But where was Nadira last week? It seems she couldn’t protect her husband from Girish  Karnad’s speech, that was aimed at exposing that jaundiced-against-certain-communities streak in most of Naipaul’s works. I confess that I was quietly elated with the incident – it was about time that someone ripped off the hypocrisy hovering around Naipaul and the heavily-biased views that he craftily weaves into his writings.