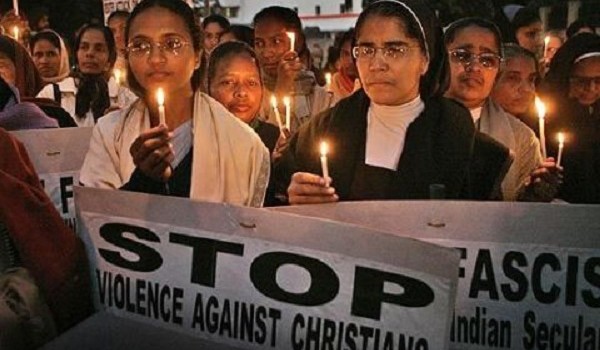 Recently, I got in touch with a prominent Christian leader, John Dayal, for his reaction on the destruction of St. Sebastian’s Church in East Delhi. He was very upset by the manner in which the Church was found burnt and destroyed.

He also said that for the last few months (from the summer of 2014, to be precise), there had been systematic attempts to attack the Christian community in the country. “In Madhya Pradesh, on November 30, two house churches in Annupur district were attacked,” he said. “Chhattisgarh has particularly witnessed regular and repeated attacks on the fundamental rights of the minority Christian community.

“Most recently, local politico organisation such as the VHP are pressurizing local Catholic missionaries to put up pictures of Goddess Saraswati in their educational institutions. Catholic schools are under pressure to rename the principals in their schools, as ‘Pracharya’, or ‘Up-pracharya’, instead of the term ‘Father’, which is usually used,” he said.

Dayal added that the entry and propaganda by Christian missionaries is banned in more than 50 villages of Chhattisgarh’s Bastar region by the local gram panchayats since late May. Elsewhere, in Odisha’s Deggarh district, several tribal Christian families were excommunicated on April 28 allegedly at the behest of religious extremists. “Three Christian families were excommunicated and deprived from enjoying common facilities of the village road, water and forest land because of their faith in Christ. The well commonly used by the Christians was polluted by adding filth to it. And the Christians have been forbidden to mix or talk to anybody, to take part in any social functions or walk on the main road,” Dayal explained.

Reportedly, extremist elements have also threatened to snatch away the Government land allotted to the Christians, cancel their BPL Cards and demolish their houses if they do not renounce Christ. “In Chhattisgarh’s Jagdalpur, about 100 Christians who were denied rations for two months for their faith in Christ were beaten up by a mob,” Dayal went on to add.

Madhya Pradesh fares no better, apparently, with reports of local religious political groups threatening to harm Pastor Bhikanlal Dhurvey several times for conducting prayer meetings in Bhopal. However, the pastor continued to conduct worship services and later started to build a prayer hall in his land. Subsequently, the extremists filed a police complaint against the pastor for illegal construction. The construction has since been stopped and prayers are now being conducted in the homes of local Christians.

Two churches in Kundupur, Karnataka and three chapels in Irinjalakuda diocese were also damaged by miscreants.

I can’t help but wonder, coupled with extremely inappropriate utterances by ministers in Modi’s Cabinet, which way will the tide turn for the religious minorities in the country?

One Response to As Christmas nears…