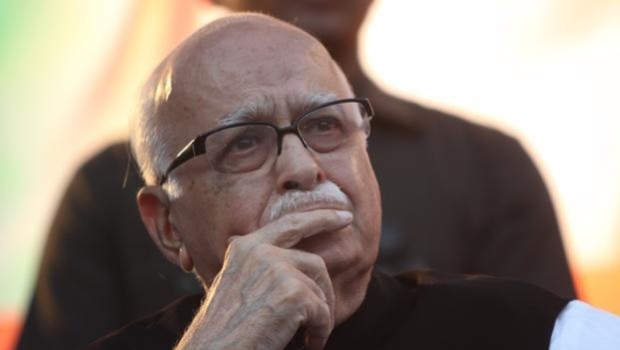 A victim of his own moves?

LK Advani is unfortunately placed – he seems stifled within his party but he’s not allowed to move away, either.

This entire episode around LK Advani seems layered. Even the politically naïve can understand that Advani has not been allowed to resign, despite his initial outbursts. He has not been allowed to break free from the controlling powers of his political party, the BJP. It almost seems as though he is being forced to retain his mask, keep up the façade of ‘togetherness’ of the Right-wing brigade.

There seems to have been a complicated build-up to this turn of events. Is it possible that Advani couldn’t cope with the frustration of being sidelined and finally wanted to break away from it? How interesting that all these years, he’d diligently worked at so many gimmicks and indulged in hate politics to gather votes for his party, and the same party is most likely stifling him for a long time now.

Who can forget Advani’s master move, the idea that sparked the kind of fire in the country that it is still not being put out? In the early 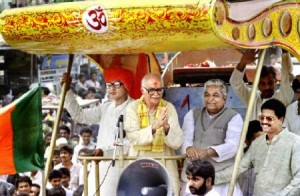 90s, he undertook the rath yatra all the way to Ayodhya, whipping up communal frenzy along the entire route and reveling in it. His rath yatra can be termed as one of the turning points in modern Indian history, for it sowed seeds of communal divide and hatred between communities, left a permanent imprint on minds. That communal hatred still continues to poison the atmosphere of this nation.

And who can forget that photograph of him and Uma Bharti and Murli Manohar Joshi, hugging and clasping each other as the Babri Masjid was being destroyed? The disturbing events of those times continue to simmer to this day, with riots periodically breaking out and terrorists planting bombs in the name of jihaad and the memories of 1992.

As the baton passes to Narendra Modi (or it seems to be forcibly grabbed by Modi and his men in a bloodless coup!), there is not just worry but a growing unease for the safety of this land and the people living in it

Ironically, we can turn to these lines from a poem written by BJP patriarch Atal Bihari Vajpayee from his book of poems, Twenty One Poems, for some succor. The poem is tilted ‘Power’: 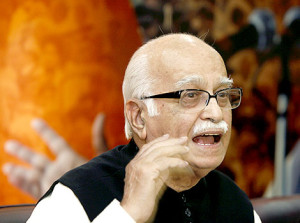 “To those who try to reach/

The throne of power/

Over mounds of dead bodies/

I have a question:/

Did nothing bind them/

To those who died?/

Was it not enough that they too were of this earth?/

‘The earth is our mother, and we are her sons’:/

This mantra from the Atharvaveda,/

Is it only to be chanted, not lived?/

Constitute neither a certificate of culture/

Nor a badge of patriotism,/

They are proof of bestiality,/

As if these be the deeds of sons,/

Mothers should not wish for any./

A throne smeared with the blood of the/

Ranks lower than the dust of the cemetery,/

The lust for absolute power is worse/

Than a thirst for blood.”

One Response to A victim of his own moves?