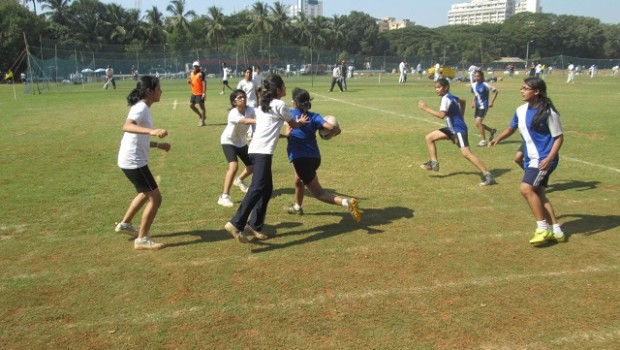 Nasser Hussain, captain of the Indian Rugby team, tells us that rugby is slowly gaining acceptance among the city’s schools.

Fortunately for the sport, this state of affairs is slowly changing. Rugby is being played regularly at the school level in Mumbai, and interest is particularly high among the city’s civic-run schools. Of course, like most other sports in the country, it suffers from a lack of awareness and accessibility, apart from a pronounced lack of structure at all levels of the game. 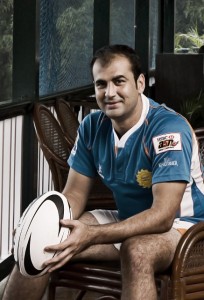 “The sports management for any non-cricket sport in the country today is not structured, except maybe for the IPL (Indian Premier League),” says Nasser Hussain (33, in pic on left) , current captain of the Indian Rugby team. We’re sitting at his office at Marine Lines, where he officiates as General Manager (Rugby India), the Indian Rugby Football Union. He says, “The country is very cricket-driven; there is a lot of focus on the sport, though so much has been done for it already. Everyone’s struggling in other sports. There are many obstacles and challenges, and not enough support and assistance.”

There is not enough sponsorship support for the sport as well, he laments. “We get a sponsor maybe for a year or so, which isn’t beneficial at all. There has to be a long-term partnership. Unfortunately, even the big companies are not willing to back rugby, they’re so focussed on cricket. It’s like they would rather be one in a million (sponsors) in cricket, than be the only one in another sport.”

Star of the sport

Nasser should know what he’s talking about. He started playing rugby at the age of 15, and was the youngest member on the squad that played internationally in 1998. “Hardly anybody played rugby in those days,” he remembers. “The club structure did exist for the sport, but there was absolutely no mass appeal. A little later, I got the opportunity to play for Tynedale RFC and Northumbria University, Newcastle upon Tyne, England.”

In the years 2007 to 2009, Nasser worked in sports management for other sports, and a bit later, got the chance to come back to rugby. “I decided to try and manage the sport professionally, create more awareness of the sport, get more school children involved,” he says. “Of course, we’ve had to overcome several hurdles, but it’s been a good journey overall.”

Today, the Union runs several Under-12, Under-14 and Under-17 programmes in Mumbai’s schools, and is seeing increased participation every year. “The training is imparted at no charge; all the child has to do is show up for practice and matches,” Nasser explains. “Initially, a lot of parents were hesitant about sending their children to play rugby, because they feared how violent the game was. But we introduced non-contact rugby for both boys and girls, and everyone’s happy,” he grins.

Nasser goes on to explain that the right time to take up the sport is at the Under-10 level. “In fact, that’s the right age for any sport. It is easy at that age to pick up basic functional training and movement skills. The sport also develops a child’s fitness and leadership abilities.” The Union introduced the rugby programme in Mumbai’s schools six years ago. “We started with about eight schools. Now there are 50 schools in Mumbai regularly playing rugby,” he says, adding that these schools range from international schools to the BMC ones.

Interestingly, he finds that girls are more receptive to the game than boys. “We started with the boys’ programme first, then introduced the girls’ programme. But girls are more involved in the sport. See, there are not too many team sports that cater to girls. Even the Indian National Women’s team is doing very well,” Nasser explains.

Hearteningly for the sport – though it is still in the nascent stages, with India being ranked 83rd of 95 rugby-playing countries in the world – the sport was recognised in July 2012 by the Schools Games Federation of India. A student carrying certificates for rugby can now get enrollments in college or the police cadre through the sports quota. “There will be increased participation, but we also need more sponsors and funding, because the Union does not charge coaching fees. Though the sport used to be restricted to elite circles in the country, we’ve seen a lot of new players coming from Jharkhand, Bihar and Jammu & Kashmir. Rugby’s gone quite mass in the last few years,” Nasser says.

If you wish to be a sponsor for rugby tournaments and training, contact Nasser Hussain at nasser.hussain@rugbyindia.in or 022-2205 3897.