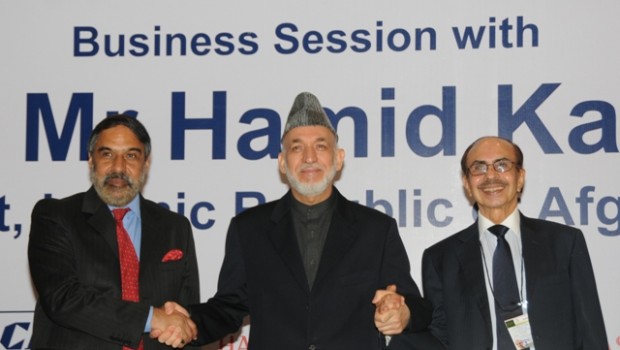 The field is set for major Indian investment in Afghanistan. Or so says its President, Hamid Karzai. At a recent business session organised by the Confederation of Indian Industry (CII), FICCI and ASSOCHAM in Mumbai, Karzai said that his country “is ripe and ready for investments from India and offers lots of opportunities for Indian industry…You need not worry about your investments. Not only will Afghan law protect you, but also Afghan people will add to your profits.”

Karzai added that Afghanistan’s forex reserves, including gold, had risen to $7 billion now from $180 million in 2002. “Those who came in the past few years like a telecom company with $5 million investment has now become $600-700 million and this applies to other sectors as well.” He spoke about the rich mineral resources in the country and said that already an Indian conglomerate is in talks for an iron ore mine and hoped a contract would be signed shortly.

The bilateral trade between the two countries is estimated to be over $600 million every year. Speaking on the occasion, CII President Adi Godrej said, “Our Government and us in the industry view Afghanistan as a key ally – This is underlined by the government of India’s announcement three days ago of $100 million to support small development projects in Afghanistan.” He outlined a five- point agenda to strengthen the ties between the two nations, suggesting that Afghanistan embrace a frugal innovation approach to help small and micro entrepreneurs and women under the small development projects in Afghanistan. He also suggested setting up an India Afghan business forum to promote economic cooperation.