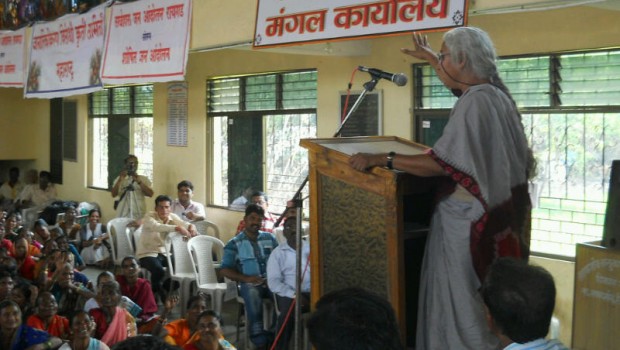 The Maharashtra Industrial Development Corporation (MIDC) is facing stiff opposition from farmers in Maharashtra. And the reason is the proposed Mumbai-Delhi industrial corridor.

Currently, farmers and activists from 10 States in the country are up in arms against the proposed corridor, for which land is being acquired from farmers. Yesterday, the agitation reached Khandesh after crossing Konkan.

As per the NAPM, under whose direction the agitation is taking place, the yatris started off on foot from Karla SEZ area (Lonavla) late at night to reach Malegaon in the morning, where they were welcomed by their comrades from Rashtriya Seva Dal. The first halt of the yatra was at Jodge, where 3,600 hectares of land of five villages have been given notice under the Maharashtra Industrial Development Act (MIDA).

“A population of 30,000 villagers in Jodge, Jayuk, Chicharovar, Sayane BK and Sayane SH villages have been given notice. The villagers have rejected the entire project. They say that they are against forceful acquisition of land without a stated reason and without the consent of gram sabhas under MIDA, especially since MIDA already has possession of prior acquired land,” an NAPM spokesperson said. The yatra is said to have then reached Dhule city after giving support to the struggle of these people, and promising to connect their struggle to the one underway at the national level.

Shyam Patil, a Dhule resident and agitator, said of the Dhule-Nardana Industrial Area, “The MIDC has completed the formalities under clause 32 (1) and (2) for acquisition of 634 hectares of land in Malich, Gorne, Baghode, Menane and other villagers, despite a textile industrial area already in function in the region.”

Suresh Desle of Maliv village said, “The people who had lost their land earlier are yet to get their due, and now fresh notices have been give out to villages with dual crop farmland. I had discussed the gram sabha’s proposal in this regard not only with the Collector, but also with the Secretary and Minister. However, no conclusion has been reached till date, and the sword of acquisition still hovers over their heads.” He added that a small committee had also been formed with the support of local farmers there.

The next meeting was at Sonegaon, with the gram panchayat and villagers. While the land there is also under threat under the Dhule-Bardhana Industrial Area, the process of acquisition hasn’t begun yet. The people there allege that the collector has given away 43 acres of land, which belongs to to the gram panchayat, to the Dhule-Itarsi Wiring Company without any legal investigation or gram sabha consent.

“A frightening image of MIDC is evident at every step. 17 lakh acres of land have been acquired for industrial purposes in Maharashtra, from the Konkan, Marathwada and Khandesh to Vidarbha in the last 50 years. People across different regions have expressed their anger at MIDC, and are all set to intensify their protest,” the NAPM spokesperson said.