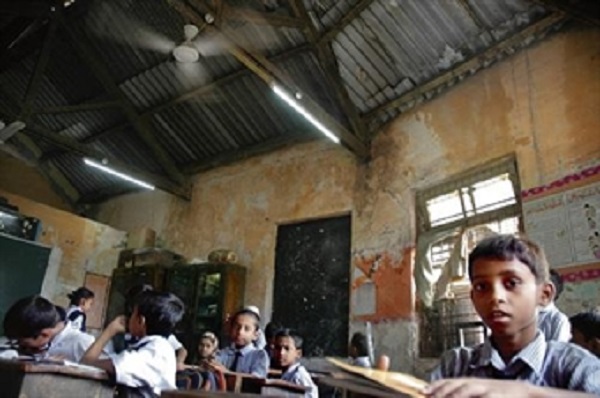 BMC’s proposal to allow privatisation in its schools will only worsen its flaws and introduce new ones, some experts feel.

“World Bank’s agenda is demolition of public-funded school system and open gates for privatisation and commercialisation.”

These statements laid the tone for an evening dedicated to the current mess that our education is in. In a panel discussion titled ‘Neo-liberal Assault on India’s Education System and Corporatisation of Mumbai’s Municipal Schools under PPP’, Dr Anil Sadgopal and Simantini Dhuru, both educationists, spoke at length about the education system in India in general and of Mumbai in particular. The speakers also spoke against privatisation and how it is only going to worsen the system.

The talk came in the context of BMC’s recent proposal to allow public-private partnership (PPP) in the management of civic schools. The Brihanmumbai Municipal Corporation (BMC), on January 23, 2013 took a decision to hand over all of its 1,174 schools to private organisations and companies under a ‘Public Private Partnership’ scheme of ‘School Adoption’. 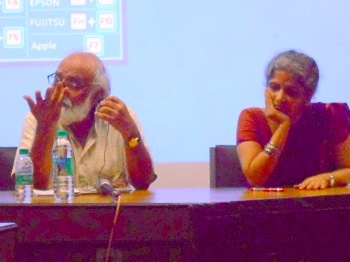 Some concerns
Coming to the BMC’s proposal, Dhuru raised questions and concerns over the conditions under the Public Private Partnership Model.

Dhuru pointed out that under the objective of PPP, there has been no mention of ‘Right of Children to Free and compulsory Education’ Act 2009. Also, the period of the PPP arrangement is 10 years, which Dhuru said “could ensure that the handover will acquire permanency.”

Dhuru also critiqued the arrangement for the proposed ground checks, under which supervisors of the Education Department are to visit the handed over schools four times a year. “This condition is contrary to the present practice wherein Government officials walk in to the schools as and when they feel like throughout the year. Why should the PPP schools  be visited by officials only four times?” said Dhuru.

Further, the clause that ‘Teachers appointed by the PPP schools will not do any administrative work and will not leave school for any work’ is contrary to the present practices in our schools.

For Type-ii of the model where NGOs appointed and BMC teachers work in combination if the BMC fails to appoint staff by August 31, the NGO may appoint its own staff. “This amounts to systematically disbanding BMC permanent staff and creating another layer of contractual teaching staff,” said Dhuru.

She also pointed out some clauses as a means of coercion: The first clause mentions that the PPP partner organisations will be allowed to evaluate the performance of the teachers appointed in their school and can demand that non-performing teachers be sent/transferred to another MMC school. Second clause mentions that the PPP organisation will have the right to record its remark in the teacher’s confidential report along with the head teacher.

“Besides coercion, the NGOs/Corporate houses will be allowed to lure teachers monetarily into supporting and continuing the PPP arrangement,” she said.

The overview of education

Dr Sadgopal (in pic on right), of the All India Forum for Right to Education (AIFRTE) and former dean, Delhi University, gave a critical overview of how the education system has deteriorated over 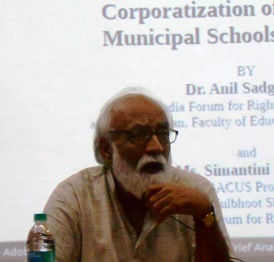 “In the last two years, expenditure by BMC schools has increased. That may be good news but do we question why or for whom has it been increased? It is simple. Funds are given to deck up these schools for corporates so that they don’t have to spend from their pockets,” he opined.

According to Dr Sadgopal, these private players comprise NGOs, corporates and religious bodies who will “worsen the disparity in education by increasing the cost of education under the garb of improving quality.”

Dr Sadgopal is a pioneer in the field of education and has been instrumental in successfully running the Hoshangabad Science Training Programme (HSTP), a first-of-its-kind national-level initiative for pedagogical improvement. Having been part of various government bodies like Central Advisory Board on Education (CABE) and NCERT, the septuagenarian views education through the Constitution. “The BMC, due to its failure has decided to abdicate the entire constitutional responsibility in order to improve the quality of education, but how can it do that when the Constitution of India mandates it to run good schools and not bad schools?”

He talked of how this move is nothing but brushing off one’s responsibility. “The onus of improving Government schools lies with the Government but it seems to have given up before even trying.”

A supporter of the ‘Common School System’, Dr Sadgopal added, “Such a system is the most feasible system in our country which suffers from huge disparities. With such a system, all the students, irrespective of class and caste can study together. Besides, when schools ask fees, the very idea of equality gets violated and that is contrary to what the Preamble stands for.”

Referring to the Bihar tragedy where students of a primary school died after consuming food under the Mid-Day Meal Scheme, Dr Sadgopal critiqued the many school systems India has. “Such tragedies strike the poor. Media editorials suggest better participation of parents and teachers, better transparency, etc. But none of them question the layers having been created in this unjust system,” he said.