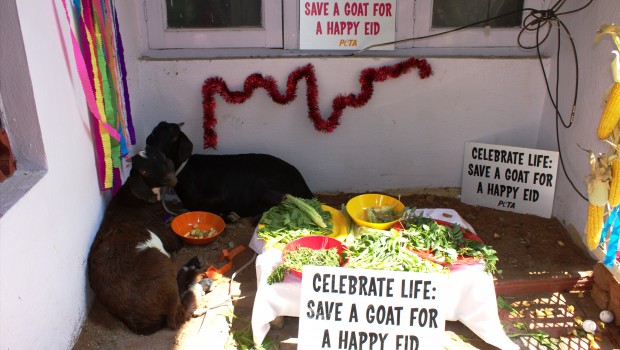 PETA had goats for dinner

The animal rights organisation threw a party for goats on Bakri Eid day. Meanwhile, the city celebrates with full gusto.

It’s the same story every single year. Goats and sheep are taken across the city to Muslim homes, where families eagerly await them every Bakri Eid day. But a recurring theme in the celebrations, is that the animals end up dead even before they are cut – many times during transport, at other times because they are artificially fattened up in a very short period of time, thus making them very ill.

A seller who spoke to us on condition of anonymity said, “Orders are increasing every year. Sometimes, we find that the animals don’t survive very long after selling. Some customers say that the animal was unconscious after the sale, others say that it couldn’t walk properly and kept collapsing.”

In the midst of this, animal rights champion People for the Ethical Treatment of Animals (PETA) told The Metrognome that PETA had goats for dinner this year. In an email sent to us by Corporate and Government Affairs liaison, PETA India, Sarfaraz Syed said, “This Eid, PETA had goats for dinner, not as food but as the guests of honour. We urged people to join us in using this auspicious occasion to celebrate, not take, life and to give alms such as fruits, vegetables, breads and pulses to the people and animals who need it the most.

We’ve pushed the Ministry of Environment and Forests to ban all animal sacrifice in the country. As per the Slaughterhouse Rules, slaughter is supposed to happen in a licensed slaughterhouse, not on the streets. Most cases of sacrifice/slaughter are conducted in temples or on the roads, against the Rules.

We also have a case on in the Indian Supreme Court against year round illegal treatment of animals during transport and slaughter. Goats, buffaloes, sheep and other cattle are crammed onto vehicles on their way to slaughter in such high numbers that many break their bones and die en route. Those who survive are hacked to death with dull knives in full view of one another.

Our year round focus is on raising awareness on the benefits of going vegan for the animals, our health and the environment in a variety of ways so that it reaches the maximum number of people.”