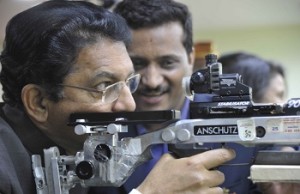 Said Ranjit Savarkar, “The Rifle Shooting Range has produced several national and international shooters. The Range has been modernised by incorporating the latest Hybrid 8 lane Olympic Standard Target System. This is the only non-Government range in India to have modern facilities.”

The 10- meter Rifle Shooting Range was inaugurated by Anjali Bhagwat and Suma Shirur on February 19, 2006.

Vishwajeet Shinde is the Chief Coach at the Range. During the last nine years, more than 3700 students have received basic training at the Range.

One Response to Mumbai gets modernised air rifle shooting range