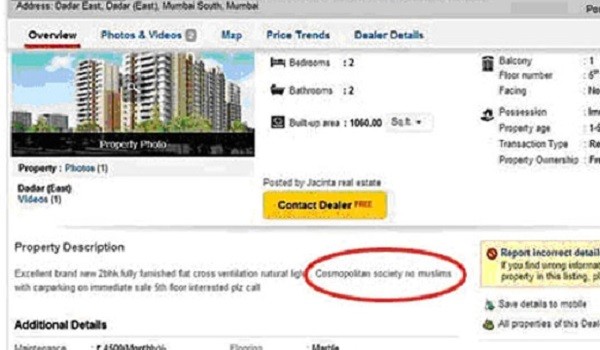 99acres goes all out after ‘No Muslims’ ad furore

After the controversy, website is working with the National Commission for Minorities against religious prejudice in the real estate sector.

It was a seemingly innocuous ad posted on the real estate site www.99acres.com, for a flat in an upmarket, “cosmopolitan” locality. However, two words inserted by the broker who posted the ad – Jacintha Estates – caused a furore all over Mumbai and outside, too – the ad stated that “No Muslims” would be allowed to purchase the flat.

A flurry of official statements from 99acres sought to lighten the controversy, but the damage was done. The social media erupted after the ad was discovered, and though the offending words were removed from the ad almost immediately, newspapers and other media were quick to highlight the issue. In Mumbai, the issue of apartments not being rented or sold to members of the Muslim community is an old one; however, the blatant refusal to entertain queries from Muslims shocked and angered the public.

As per the points agreed on during the meeting, 99acres will “evolve a good practices advertising code for the real estate sector vis-a-vis religious prejudice and submit it to the Minorities Commission for consideration. This code would include a glossary of terms to be avoided when advertising real estate online,” the release said. It added, “99acres will also spread awareness among the real estate broker community and educate them to avoid discriminatory practices in the real estate sector. Towards this end, 99acres would carry appropriate messages and banners on its site and also reach out to real estate brokers and disseminate information about avoiding discrimination.

“After this unfortunate incident, 99acres is also introducing a software check where if a listing carries the name of any religion, caste or community it will be flagged to the 99acres.com content team for review. We have examined all the other listings on 99acres and have sanitised any (either deleted or edited) that was felt to be either clearly discriminatory or could be interpreted to be discriminatory.”

Poonawalla had earlier petitioned the National Commission for Minorities against the practice of barring certain communities on the basis of religion from the real estate. He had also vocally campaigned on social media and in the print and TV media against such practices and had suggested the gathering of all stakeholders of the industry to create a Fair Housing Policy that prohibits discrimination not just against Muslims but all other communities.

After the meeting, Habibullah said, “I am glad that a positive action has resulted from this controversy.”

Poonawalla said, “Such discriminatory practices have no place in today’s India. We must work against the root cause and not the symptom of the disease. It is the ghettoisation of the mind that leads to such discrimination. We are one society and we must learn to live together. I hope that other portals that carry such offensive advertisements will follow the example set by 99acres. I also believe that this is a first move towards evolving a Fair Housing Policy will ensure that discrimination against all communities and not just Muslims can be brought to an end.”