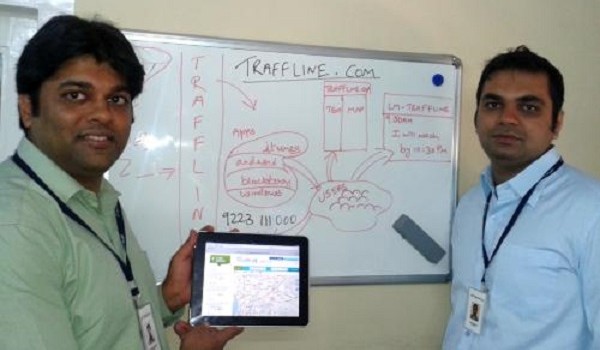 Building a business on Mumbai’s traffic

Co-founder of Traffline, a traffic info service started in Mumbai, explains how he and his team made the startup successful.

It was a revolutionary idea for the country – log on to a website or app and find your nearest road route, with directions on how to get there and how much time you would need. When Brijraj Vaghani and Ravi Khemani (left and right in pic above) returned from the US at the end of 2008, however, they realised that the germ of a great idea they had could develop into something big and beneficial for India.

The duo started Traffline in 2012, and till date, the traffic info service has been one of the fastest growing ones in the country. It is of especial use in busy cities like Mumbai and Delhi, where there is a heavy reliance on road transport. “However, India does not have a culture where one looks up information on the web or on one’s mobile phone when it comes to travel,” says Brijraj, speaking to The Metrognome from his Vile Parle office.

“Indians don’t check out traffic conditions till they are actually stuck in traffic. And even then, they avoid travelling instead of looking for alternate routes. Inculcating the culture of looking up traffic info before leaving the house, then making it a habit, was the biggest challenge for us,” he explains.

Brijraj and Ravi set up Birds Eye Technology in 2011, and Traffline started operations in 2012. India is a very rich market for traffic apps, Brijraj says, because of the “multiple modes of transport, the multiple routes you have, especially in Delhi.” He adds, “We got together with two more guys – Sushant Bansode and Rizwan Ansari, and got working on Traffline.”

“You must build a good team, and you must be willing to go out there and sell your idea. Going out on the field is crucial. You cannot build your business sitting in office,” Brijraj says.

The start was frustrating – where were they to source data from? “The infrastructure to map and source data did not exist, not just in Mumbai, but even in Delhi and Bengaluru,” Brijraj says. “We had to actually go out on the field and collect data. Our initial data came from GPS installed in cabs and private vehicles. We also approached the Mumbai traffic police, but they were not helpful at first. It was tough.”

The team started work with field operations, renting out servers from Amazon, and procuring office space. “We procured angel funding in the first year. This took care of our inter-country travel, staff salaries, business development. Building the software itself took up to Rs 15 lakh,” Brijraj says.

Traffline has just received its third series of funding. “With every phase of funding, we expand our staff and business a bit more,” Brijraj explains, adding that Traffline aims at a presence in 10 Indian cities by the end of year 2014.

There is no substitute for ground work and market research. “What is the need for such a service? Who will benefit? What are the ways to make the business more user-friendly? Entrepreneurs must ask themselves these questions,” Brijraj advises. “There must be a plan at the very start – how much money will be needed, what are the business development plans, what kind of promotion are you looking at?” he adds.

Money is a crucial element in a business like this, more so, because the returns come in much later. “You have to build your database first, generate awareness, get users hooked. Once the business becomes stable, you can scout for funding,” he says.

Procuring funding is a step that most start-ups falter on. But it’s simple, actually. “A good idea is to take money from friends and family at the start – they are least likely to bother you about returning the money and will be patient with you more,” he advises.

Clarity of vision is important, Brijraj says. “You have to be clear in your head about what your business is, where you want it to go. Merely attending an investors meeting with a PPT will not help. Be honest, do your groundwork, and be clear about your expectations. You will find that people will invest in your business.”

Apart from funding, he says, other challenges are running the business from day to day. “At the start, it can be daunting and very frustrating,” he says. “Perseverance is key. And 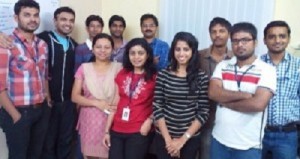 always start a business with a good co-founder that you can trust.”

In the case of Traffline, Brijraj handles the business development side while Ravi looks after daily administration, finance and project management. “You must build a good team, and you must be willing to go out there and sell your idea. Going out on the field is crucial. You cannot build your business sitting in office,” Brijraj says.

In Mumbai, Traffline has now developed an excellent working relationship with the traffic police. “We worked together a lot during the recent Syedna funeral, and the Ganpati festival last year. We sit in their control rooms and issue alerts. This has happened after continuous follow up, and the traffic police see value in our services. Now they call and inform us about closed roads or traffic restrictions,” Brijraj reveals.

Brijraj confesses that he took his time coming around to the idea of working on Traffline full time. “If you are sceptical or have the least doubt, work on the project part time. But keep researching the model constantly. Take the plunge to join it full time only when you have the confidence to do so.”

Be patient till the money comes in, he says. “Now that we are known and that we have funding to back us, naturally the expectations from us have increased. This means that we have to scale up our operations faster, grow our consumer base exponentially, come up with better products. Venture capital is like rocket fuel – it can take you from one spot to another very quickly, and people will also be willing to work with you more if you have funding,” he says.

2 Responses to Building a business on Mumbai’s traffic