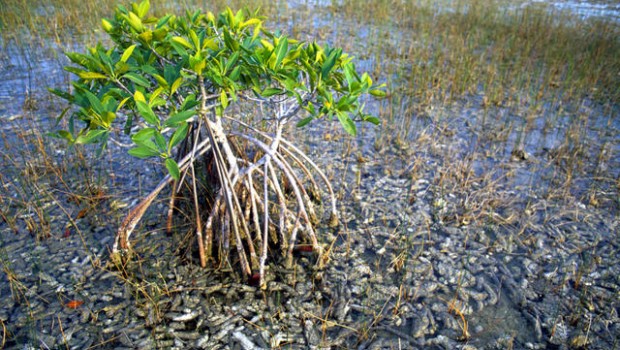 Again and again, especially when rains lash the city and submerge large areas of land, news reports remind us of how the city’s fast-depleting mangrove cover could have partly helped save Mumbai. And then we forget about the rains and, more importantly, the mangroves. If mangroves are to be sustained and protected, citizens must learn more about them, and scholars of the subject need to come up with intensive research on the topic.

Suppose you had a place that let you wander around and look at mangroves up close, stare at animals and birds that live inside them, and sit for a lecture or two? The plans and design for such a place is ready and has the Maharashtra state government’s seal of approval. But don’t get too excited just yet – the project is stalled for a lack of funds. The Mangrove Wetland Centre was conceptualised in 2006, got all the requisite approvals and permissions till date, but given the current economic scenario in the country, nobody’s willing to fund the project.

Says Debi Goenka, conservationist and one of the trustees for CAT, “Permissions were the issue at first (for the project not moving forward), but it is not the issue any more. The problem now is money. In the present financial climate, nobody actually has the money for funding the Centre.”

He says that the estimated project cost of the Centre is Rs 140 crore, spread over five years. “The Hong Kong and Shanghai Bank (HSBC) chipped in for our field studies and the making of the master plan. But finding a single donor now for the entire project is next to impossible. We’ve approached several major businesses for funds, but nobody’s willing to invest. Besides, the project needs a 100 per cent fund commitment to start, so we can’t scout for a part of the funds and expect that the rest of the money will miraculously appear,” Debi explains.

The problem is, he adds, that hard-headed businessmen will not fund the project purely out of altruistic motives. “People are not sitting around to give money unless there are assured returns,” he says.

Designed on the lines of the Mai Po Marshes Wetland Park in Hong Kong, the project was ideally suited to Mumbai because it is a living example of an island that survives on its mangrove cover. It is to come up at Bhandup, along the western coast of Thane creek. An MoU was signed with the Forests Department; the project is to come up on forest land and is to be non-commercial in nature. “We are not looking for any commercial rights on the project,” Goenka says.

Conceptualised and developed by a team of architects and experts from Singapore, the Centre will allow visitors a walk through forest areas and see various flora and fauna residing there. They can also learn about the importance of mangroves for the city’s ecology and what can be done to prevent their destruction. “The Centre will also provide employment to local communities while being a prime example of green governance,” Goenka added.

The project was initially entangled in a lot of bureaucratic red tape. “In 2007, we submitted the project proposal to the state government. The government was totally receptive to the idea, and very happy with the concept because of its tourism potential and because no such Centre exists anywhere in the country,” Debi says.

However, despite receiving verbal approval, the project got stuck in Nagpur for two years. “In 2009, we finally got the approval, and it then went to the Ministry of Environment and Forests (MoEF) for a final go-ahead,” he says, adding that now the Centre has all the permissions and approvals from all the government agencies.