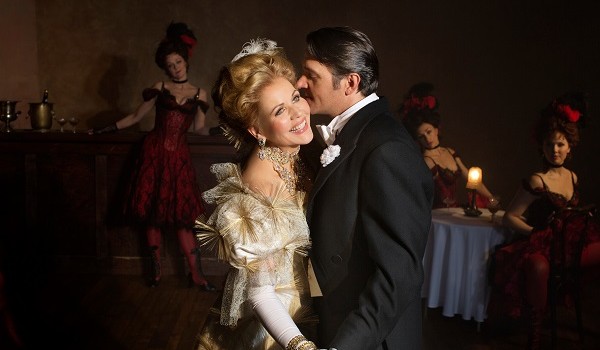 The great Renée Fleming stars as the beguiling femme fatale who captivates Paris in Lehár’s enchanting opera, seen in a new staging by Broadway director and choreographer Susan Stroman (The Producers, Oklahoma!, Contact). In an art-nouveau setting, it features a scintillating climax with singing and dancing grisettes at the legendary Maxim’s. Nathan Gunn and Kelli O’Hara co-star and Andrew Davis conducts.

The basis of the story, concerning a rich widow, and her countrymen’s attempt to keep her money in the principality by finding her the right husband – comes from an 1861 comedy play, L’attaché d’ambassade by Henri Meilhac. The operetta was first performed at the Theater an der Wien in Vienna on 30 December 1905 with Mizzi Günther as Hanna, Louis Treumann (de) as Danilo, Siegmund Natzler as Baron Zeta and Annie Wünsch as Valencienne. It was Lehár’s first major success, becoming internationally the best-known operetta of its era. Lehár subsequently made changes for productions in London in 1907 (two new numbers), and Berlin in the 1920s, but the definitive version is basically that of the original production.