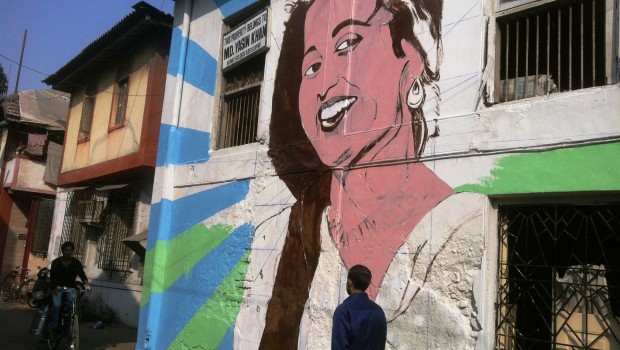 VIDEO: Painting his love for Madhubala

Artist, painter Ranjit Dahiya is hard at work on his Madhubala mural at Bandra. The painting will be complete tomorrow.

Ranjit Dahiya (slowly gaining fame for his much-feted ‘Bollywood Art Project’) is currently doing what he is best known for – painting huge murals of yesteryear Bollywood stars. He is currently painting eternal Queen of Hearts Madhubala right next to his last smash hit, a mural of the film Anarkali.

He started painting the mural two days ago, timing the activity to coincide with Madhubala’s birthday on February 14. “I was looking for a particular image of her, and I spent some time looking for it on the Internet,” he told The Metrognome. The harsh weather and long periods of standing on a shaky ladder are taking a toll on him, but Ranjit was still going strong on Day 3 today. “I’ll finish most of it tonight, and tomorrow after a few final touches, it will be complete,” he said.

If you’re in Bandra today and want to cheer Ranjit on or simply gawk at the big canvas he’s working on, head down Chapel Road and ask for the artist who painted Anarkali. Or head to the site tomorrow to view the completed work. With his track record, this one’s going to turn out well, for sure.

Watch Ranjit in action on Day 3: