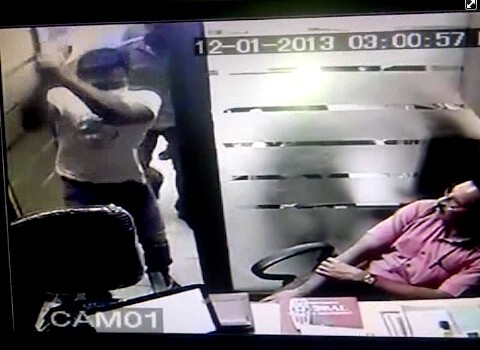 RTI activist Sulaiman Bhimani’s office was attacked by a group of men two days ago, but they fled within seconds. Bhimani himself sustained a minor injury.

On the afternoon of January 12, at about 3 pm, eight unknown men entered Mumbai-based RTI activist Sulaiman Bhimani’s office located at Goregaon with sticks and swords, and smashed a laptop, a printer-scanner and a computer keyboard.

The attack ended within 10 seconds as Bhimani’s neighbours raised an alarm. While retreating hastily, they slashed wildly at the nameplate with their swords, and kicked at the wooden door frame, smashing it. Bhimani escaped with only an injury on his finger.

Fortunately, this entire episode was captured on two CCTV cameras installed inside and outside Bhimani’s office. (The man seen on the right in the pink shirt is not Bhimani, he is a visitor. Bhimani, being directly seated under the CCTV camera, is not visible in the footage below.)

A man wearing a T-shirt is seen entering from the main door into the office of Sulaiman Bhimani, and abruptly smashing a laptop, before dropping his stick and fleeing. The other assailants are seen through the glass, swinging wildly to damage the office equipment before they retreat. The attack ended within 10 seconds. Bhimani, who suffered only an injury on his finger, is not seen in the footage as he was seated directly under the CCTV camera.

The man in the blue shirt talking on the phone is a visitor, and he completely fails to react as the people wearing handkerchiefs and carrying sticks and swords walk into the cabin. (This man is the “rounder” of a well known security agency.) While retreating hastily, the assailants slashed wildly at the nameplate with the swords, and kicked at the wooden door frame, smashing it.

Bhimani feels that the men were sent by a local builder due to his expose that involved a builder, MMRDA and a plot of land at Gilbert Hill. (Read details of the case here). The builder and unlawful elements mentioned in this report suffered losses of several crores when MMRDA cracked down on them recently, evicted 50 tenants with police action, and served eviction notices on 102 others. They have criminal records, and have allegedly threatened Bhimani in the recent past.

Krishnaraj Rao is an RTI activist.