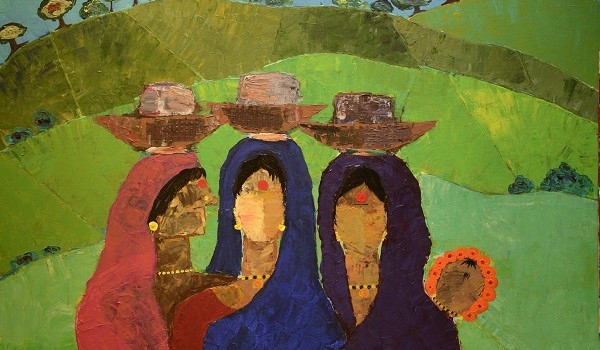 Mamta Chitnis Sen’s works address the theme of women left behind to look after family lands in Sawantwadi’s farming regions.

This is one exhibition you simply must attend – it comprises some lovely paintings, with a very sensitive theme titled ‘The Wait’.

Mumbai-based journalist, writer and artist Mamta Chitnis Sen has put together ‘The Wait’, a collection of her original paintings rooted in Sawantwadi, a former princely state and part of the Konkan belt of western coast of Maharashtra. Sawantwadi has the highest numbers of farmers who have abandoned their lands and are working as migrants in neighbouring cities. The women and children left behind by their husbands end up as mere ‘protectors’ of the lands they once toiled in. The lands often are sold off or abandoned, empty and deserted. 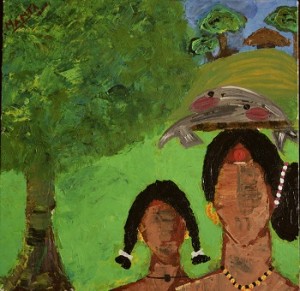 The works, acrylics of canvas, highlight the plight of these women and their circumstances.

Born and brought up in Mumbai, the subjects of Mamta Chitnis Sen’s works are concentrated on rural Maharashtra. A journalist and an extensive traveller, Mamta, an alumni of Sir JJ School of Art has been instrumental in creating paintings in oils and acrylics documenting the slow yet disappearing lives and identity of people, especially women living in rural India.

A palette knife artist, Mamta aims to showcase the rustic rural landscape of interior India, specially Maharashtra and Bengal through her works, which is losing itself to the ills of urbanisation.

Speaking to The Metrognome, Mamta says, “It took be nearly three years to research this subject and I actually began painting work related to it in 2013. This is the first of my Sawantwadi series.

I first noticed the subject of women merely ending up as caretakers of their own lands during my travels to interiors of Maharashtra (while reporting for my newspaper), specially the Konkan belt. I saw that in key areas of Konkan beyond Ratnagiri and Sawantwadi (which is my native place) the second generation of farmers are opting out of farming. In Sawantwadi, a large numbers of horticulture farmers preferred desk jobs in ‘large companies’ than compared to taking up farming which they believed was a tedious affair.”

She adds that unseasonal rains, too, was another reason for their growing disinterest. “Most traditional farming families including newly-married young sons in their late 20s, who were hence 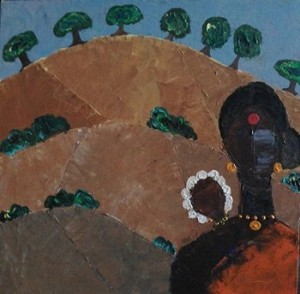 looking for alternate revenues of income. The escalating price of lands in the region was yet another reason for this switch. Many second generation families in hope of easy money were either selling off their ancestral property or keeping them on hold hoping to get more money for it.”

Hence while the men travel to cities, the women who are left behind with their kids to either toil on some part of the land to avail of Government benefits or merely as caretakers.

Most women in rural areas, despite being educated up to primary level, are devoid of any other skills or education on how to convert use the empty land to their benefit. “Further, many local builders often swindle them of their share while the men are away,” she says.

The exhibition is on at Mumbai Art By Artists, Prince of Wales Museum, Coomarswamy Hall, Colaba, from January 23 to 25, 2015 between 11 am and 6 pm. Entry is free.