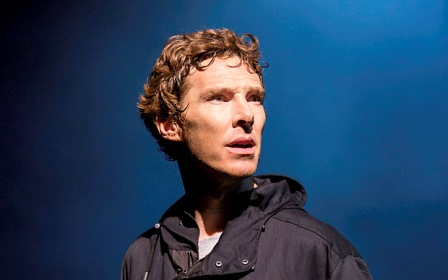 The man who took the world by storm by playing the titular role in the BBC One series Sherlock is in Mumbai. Well, not really. For those who are suffering from Benedict Cumberbatch withdrawal symptoms (S04 of Sherlock screens not before next year), the NCPA has a bit of a repreive.

Cumberbatch can be seen at the NCPA this evening and tomorrow as he portrays Hamlet in the Barbican production of William Shakespeare’s most popular play, ‘Hamlet‘. The play will be screened for audiences at the venue. For the uninitiated, the story of Hamlet goes thus: ‘As a country arms itself for war, a family tears itself apart. Forced to avenge his father’s death but paralysed by the task ahead, Prince Hamlet rages against the impossibility of his predicament, threatening both his sanity and the security of the State.’

The British actor has won rave reviews for his portrayal of the Prince of Darkness, in a return to theatre alongside a trailblazing career in film and television. The play has now stopped production in the UK while the lead actor returns to his film duties in Hollywood, but it is being screened all over the world in association with the National Theatre Live.