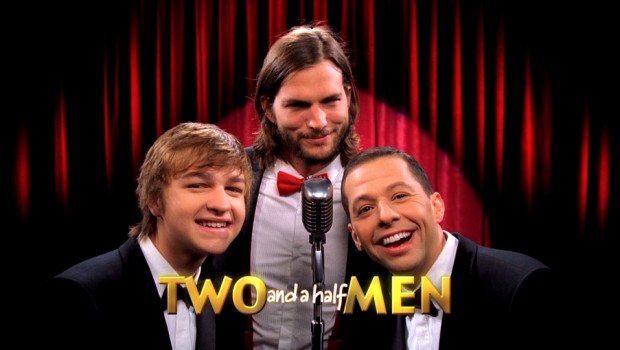 We weren’t really big fans of this show to begin with, and Ashton Kutcher has only made things much worse.

Some people, like Katrina Kaif, should only be burdened with looking pretty. They should not be saddled with more taxing jobs, like acting, or having a screen presence. Take Ashton Kutcher, for example. The guy may be a genuinely nice human being. He may be kind to animals. He may be a hit with the women. He may even have a hot girlfriend like Mila Kunis, after a really hot wife like Demi Moore, who he cheated on.

But put Ashton Kutcher in front of a camera, and he sucks. He sucks right out of the room and into the next one. Expect him to act, and what’s more, fill  in the shoes of Charlie Sheen, and Ashton Kutcher makes a complete fool of himself.

We’re patiently plodded through Season 9 of Two And A Half Men (Star World at 11.30 pm), which necessitated the bumping off of don’t-know-how-to-zip-it Charlie Sheen, who had a panga with the show’s creator Chuck Lorre. So they killed off Charlie on the show and got Goofball Kutcher, who plays a billionaire suffering from ennui and constant rejection from his ex-wife, who he still loves. He moves into Charlie Harper’s home, lets Alan and Jake (and Berta) stay on, and we’re expected to just move on with the new addition to the cast.

Except, we can’t move on. Ashton Kutcher comes across as clunky, awkward, and a grown-up version of the character he played on That 70s Show (and he was good in it, too, no doubts about that). But there’s little else to talk about. He looks like a million bucks, gives off that bewildered vibe really well. But try as we might, we just can’t help but miss Charlie Sheen and how sharp he was on the show. We’ve sat through some really mediocre writing in some episodes of the earlier seasons, and that was possible because Mr Sheen was around. It is safe to say that this show actually worked because Charlie was there – now even Jon Cryer and Angus T Jones look better than Mr Kutcher. Even the writing seems to be circling the drain – most of the punches come from Berta, and the situations are just too contrived to be actually funny.

We’re switching channels on this one.

The Diarist is a TV show junkie. If you’ve come across a new show or have something to say about an existing one, write to thediarist@themetrognome.in.