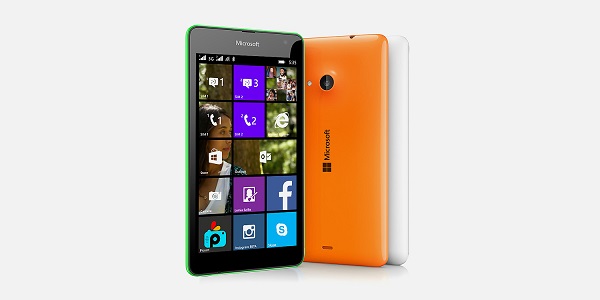 This just in: Microsoft Lumia 535

Launched in India at a price of Rs 9,199, this smartphone is Microsoft’s first Windows handset under its own brand.

Microsoft’s first Windows Phone handset under its own brand, the new Lumia 535, has been launched in India two days ago. The phone marks the beginning of Microsoft phones in the Indian market, while the low-end feature phones will continue to be under the name Nokia.

Running on Windows Phone 8.1 (with Lumia Denim Update), the Lumia 535 features a 5-inch (540 x 960) screen with Gorilla Glass 3 on top, and comes loaded with many Microsoft apps and services like Offices, OneNote, OneDrive, Xbox app, and more. Under the hood, there is a Snapdragon 200 SoC (1.2 GHz quad-core processor, Adreno 302 GPU), along with 1 GB of RAM.

On the back, there is a 5 MP (AF) camera (with an LED flash), while the front has a 5 MP wide-lens camera. There’s 8 GB of on-board storage, which can be expandable up to 128 GB, plus, 15 GB of free OneDrive storage space.

The Lumia 535 goes on sale later this week at Rs 9,199, and comes in bright green, bright orange, white and black colour options. The user will also get free 500 MB of 3G data from Vodafone for the first two months, 2 months of BoxTV subscription, free recharge from PayTM worth 600 bucks, and free EBooks from Flipkart worth Rs 1,500.