Oppo has been in the Indian market for a bit now, and while it hasn’t been a smash hit among customers, it has usually done well on design and features. Let’s see if the new R7 Lite is worth your Rs. 17,900 or not.

The looks. The Oppo R7 Lite (R7kf) has an all-around metal body with Gorilla Glass 3 on the front that curves around edges to give a nice feel when swiping near edges. The front has a small LED notification, an 8 MP camera, ear-speaker grille and sensors above the 5-inch HD AMOLED, and three capacitive keys — Options/Menu, Home and Back — that aren’t backlit. The Silver metal structure follows from the back and sides — with separate volume buttons and SIM and microSD card slots (micro + nano or microSD) on right, and Power/Lock key on the left side. On the back, you have the protruding 13 MP camera with an LED flash.

At 147 grams, it isn’t a heavy phone and is pretty thin, too. It has a familiar angular look that we have seen with previous Oppo phones and that means uncomfortable pocket baggage for some.

Screen. The device has a 5-inch (1280 x 720) AMOLED that has Gorilla Glass 3 on top. The screen is certainly not very high resolution compared to most smartphones in this price range today, but it does perform well when it comes to rich colours for images, videos and even text. The display does a decent job under sunlight, but many people may find its resolution to not be at par. 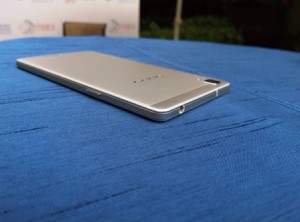 The device has a protruding camera at the back

I thought the camera app had plenty of modes to choose from. You get options like RAW mode, expert mode for more control, among the usual HDR, Oppo’s Ultra HD, etc. To try. As you can see, the camera performs well enough in daylight and can give good detailed shots, but struggles in macro and sharpness under low-light conditions. It isn’t the best smartphone camera under Rs. 20,000 today, but is surely a capable one for most use cases.

Sound. The loudspeaker on the back does a good job of giving punchy, clear sound for videos and games, but its placement (lower back) isn’t ideal for daily use. Basics like call quality, network reception and Bluetooth or WiFi connectivity worked fine, though for some absurd reason the phone doesn’t have a WPS option under WiFi, which is a basic thing for smartphones these days.

Battery life. The phone is equipped with a 2,320 mAh battery unit. The phone struggled to last a day (single SIM card) on moderate to heavy usage, but did show good standby time. It’s quite clear the battery really struggles when the screen is on for a longer time even with brightness level under 30%. Though the last firmware update did make the phone a bit more battery optimised, don’t expect much more from it. But the Power-saving mode might come in handy if you aren’t playing games of watching HD videos.

Software and performance. The R7 Lite is powered by Qualcomm’s Snapdragon 615 chipset Snapdragon 615 SoC (1.5 GHz quad core + 1 GHz quad core processor, Adreno 405 GPU), along with 2 GB of RAM. It runs on Oppo’s ColorOS 2.1.0i that’s based on Android 5.1.1. It’s good to see the company being serious about the base Android version and not shipping new phones that are running something far from latest. The look and feel of ColorOS is unchanged except for the notification bar, which now also gives you actions right under notifications just like other smartphones today.

The whole OS seems quite consistent, while much different from stock Android, its big bold icons, fonts are not really bad and kind of fit in well most of the times. The phone really loses out on everyday usage. It is fine for a few apps, but it struggles to keep up when you play a game. Frame rates drop and the phone really heats up. At this price point, it is disappointing to have this experience, and I am sure the 615 chipset (as with other phones having one of these) should be given some blame, and I would have really liked had Oppo gone with a better chipset even if it was last generation’s high-end one.

To sum up, the Oppo R7 Lite seems like a nice phone in terms of design and build quality. While it has average battery life, good screen, and a capable camera, its performance issues make it hard to recommend with the given price tag considering the likes of the Xiaomi Mi4, OnePlus One and Nexus 5 are priced similarly these days.