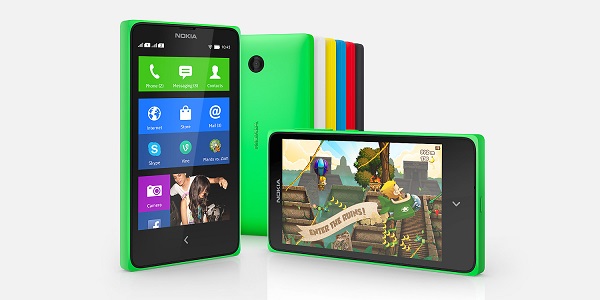 This smartphone is Nokia’s first to run Android, and was recently launched at this year’s MWC held in Barcelona, Spain.

Nokia yesterday launched its Android-based smartphone, Nokia X, in India. The device was first seen at this year’s MWC, and is the company’s first ever smartphone that runs Android (AOSP 4.1.2, to be specific).

Nokia’s X sports a 4-inch 800 x 480 screen, and is powered by a Snapdragon S4 chipset (1 GHz dual-core processor) along with 512 MB of RAM. On the back, there is a 3 MP fixed focus camera. The phone packs in 1,500 mAh battery and 4 GB of internal storage and has microSD card slot too.

Nokia has loaded the phone with its own Fastlane UI, previously seen on its Asha devices, and launcher on top of Android and has made a lot of its own apps as well as third-party apps pre-installed on the device. This dual-SIM phone has also got the Nokia Store for downloading and installing Android apps, and if there’s some specific Android app not available on the Nokia Store, the Store shows you a link to a third-part apps store to download that app from.

As far as your existing in-app purchases (Play Store) are concerned, you would have to repurchase them when after downloading them from the Nokia Store. Google’s API and services are not being used here, and Nokia is providing its own APIs and Microsoft’s cloud services for developers publishing their Android apps on the Nokia Store. The Nokia X Software has its SDK available for developers, but it isn’t open source.

Connectivity-wise, there is Bluetooth, microUSB 2.0, and 3G. The Nokia X is available in Green, Yellow, Red, Blue, Black and White colour options. It goes on sale today and has been priced at Rs. 8,599.

Buy the device at a discount on Flipkart.