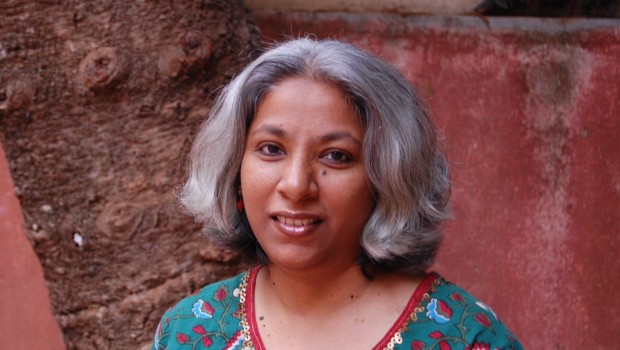 Debutant novelist Revathi Suresh tells us about writing a book for young adults ‘with exactly no story in mind’, among other things.

Writer Revathi Suresh’s book, Jobless Clueless Reckless, was released very recently. It’s a sweet little story of a teenaged girl living in an (apparently) dysfunctional family – her father and mother are almost separated, neither have enough time for their two children, her brother is strange, to put it mildly, and her life is as different from her friends’ as could possibly be. (see review at bottom).

In an interview, the author tells The Metrognome about  writing her first novel, how a story was born out of nothing at first, why she thought writing would be ‘easy-peasy’ and why the suspense of not knowing what she’ll write next is killing her.

What inspired this story? 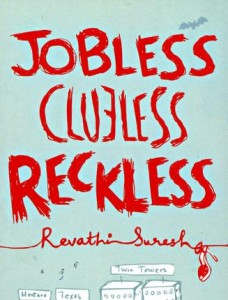 I don’t know about inspiration, it was more that I was at loose ends. Or at least that’s what the people around me seemed to think and I sort of fell in with their idea of me, you know? I had quit my last part-time job and had plans to retire and be a stay at home mom-wife and swing on a swing because housework gets done on its own magically, right? Luckily for me, everyone else around me had better plans for me and kept going, ‘So what are you planning to do now?’, and brushing aside my claims of being a homemaker.

I guess their hopeful looks got to me at some point until I gave in and decided one fine day that I would write a book because that’s what the whole world and its mom are doing right now. Have you been to bookstores lately? (There are) So many new books by so many new authors. I think even the guys who work there moonlight as novelists. So what I’m saying is, I thought writing would be easy-peasy and so cool because I wouldn’t even have to change out of my night clothes to open my laptop. And that’s how I started banging away at my keyboard one fine day with exactly no story in mind. Somewhere along the line it became a book, so I guess magic does happen after all.

How long did you take to write this book?

Two years. Mostly because I didn’t write for a good part of that time. About 40 pages into the first draft I gave up and decided I was never going to finish it, so what was the point. It took me around six months to get the courage to open that particular Word file again. Then I took another I-can’t do-this-anymore break around page 117 or 118 and returned after many months. I’ve figured out that’s my style. Ditch, don’t write. I must say it works spectacularly well.

How close is the central character to you or someone you know?

Kavya is no one I know and she’s every teen I know, if you get what I mean.

The Manisha angle is very interesting, especially since there is no happy ending to it. What was the inspiration for this part of the story?

Again, no inspiration as such. I wanted a first chapter that would suck a reader into the book right away. Only, having created that mysterious opening I struggled for a bit to close that story. I had a few options and I tried them all out. One was that I leave it open-ended but that did not go down well with some of my draft readers. Two was to make her out to be what all Kavya’s friends think she is. But that would mean agreeing that Kavya’s delusional and I wasn’t happy with that at all.

Three was to actually follow through and write a mystery, but that requires some clever planning and plotting and I wasn’t up to that. Finally, I managed to conclude the Manisha story with the help of another hanging thread I need to tie up – Kiran. In an earlier draft, Kiran kind of faded away but that wasn’t working out either, so it’s nice that one chapter took care of the two of them in the end.

What are you working on next?

Nothing right now. But who’s to say what I might cook up in a year or two from now? It might just be the family dinner or another of these I-want-to-escape-writing-so-badly-that’s-why-I-keep-going-back-and-doing-it-all-over-again-books.The suspense is killing me.

What have you written prior to this book?

This is not the first book I’ve written but this is my first novel. I have written commissioned books for IETS and a few years ago I worked with them on this really exciting UNICEF-Karnataka government sponsored Sarva Siksha Abhiyaan project for reluctant readers in rural Karnataka. Many years ago I also wrote a commissioned biography of an industrialist (and it wasn’t as boring as it sounds) which was particularly challenging because he’d been dead twenty years and trying to get a picture of his childhood and early life was pretty difficult because none of his contemporaries were around. In another lifetime (I really am a relic) I was an editor at a Chennai-based publishing house where I worked with Subashree Krishnaswamy to bring out a magazine called Indian Review of Books. The two of us also edited fiction (mostly translation) and non-fiction for an EastWest imprint called Manas.

Why I suddenly became a teen, I don’t know.

Not being a writer myself, I’ve always wondered about something: how does one write about a subject or develop a story around a character without a) The subject being autobiographical and b) The writer being even a little bit like that person.

I wondered this especially after I read books like Khaled Hossaini’s A Thousand Splendid Suns, the story of which revolves exclusively around women. Hosseini’s written that story with such sensitivity and dignity, it seems astounding that such a tale – of suffering in silence, of hiding great secrets in an aching heart, of gracefully submitting to a terrible fate, all because one is a woman – could be told by a man. That might sound childish in an increasingly gender-neutral world, even insensitive to some, but that’s just my opinion.

I wondered this again while picking up Jobless Clueless Reckless by Revathi Suresh. By her own admission, Revathi is ‘well into her dotage’. So how has she written about the life of a teenager?

The answer? Quite well.

The book is about Kavya, a teenager living at an embarassing address – Kansas, Grand Canyon, Bangalore, India – with, according to her summation of the matter, an embarassing brother and workaholic mother. You expect a teenage crush, some catty friends, trivial incidents blown out of proportion, and even a ditzy pair of parents, and Revathi gives the reader all of these and more.

Kavya’s parents have very decided ideas for their children, one of which includes homeschooling Kavya and Dhrittiman, her younger brother. The parents have all but divorced each other, and the two children live with their mother in a home that doesn’t encourage much intimacy – largely owing to the fact that Kavya’s mother has seemingly abandoned her earlier, jollier self for a career-driven woman who works at all hours to the exclusion of everything, even her children.

Several twists and turns later, while Kavya battles the ‘weirdo’ label imposed on her by peers who think she is quite possibly dangerous, to a wild night out with a seemingly demure behenji types who shows Kavya a wild night on the town, to finding out who her real friends are and what her heart tells her about Kiran, the big crush of her life, the story resolves itself to an almost satisfactory (for Kavya) end.

I thought some parts of the story dragged on a bit – the bitchy interactions between the girls, for instance – and the characters of Lara (Kavya’s best friend) and even Drittiman are slightly hazy around the edges. But I thoroughly enjoyed Kavya and Drittiman’s relationship – it is both gruff and touching – especially the way they unconsciously cling to each other in a crisis, and the missing Manisha, who Revathi opens the story with (plus the unresolved nature of her disappearance) is all too real. After I finished the book, I realised I actually didn’t want to know where and why Manisha vanishes, though I wanted to know at the beginning.

Revathi also touches on the subject of older children becoming unwitting ‘parents’ to younger siblings, the pitfalls and pleasures of homeschooling a child in system-obsessed India, and how it is possible to lead a double life and keep the two comfortably separate. All of this is done very well, without sermonising.

All in all, this is a good book to recommend to young adults, especially if you’re trying to wean them away from such horrors as the Twilight series. Jobless, Clueless, Reckless is a good read because it is frank, humorous and does not pretend to be something it is not – much like its heroine.