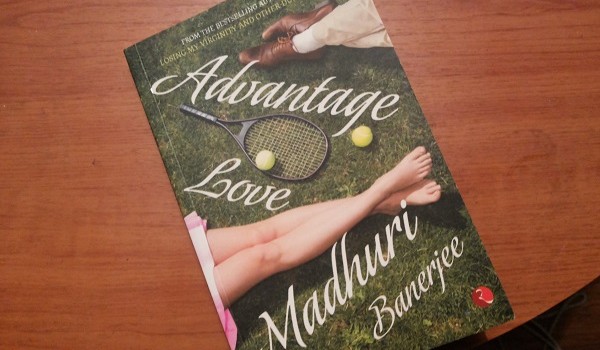 Madhuri Banerjee’s newest book has an interesting plotline and two likeable characters, but is marred by some cliched, preachy storytelling.

I’m not a huge fan of romance novels, but I don’t turn up my nose on them either. If written cleverly and with the right mix of empathy and humour, there really isn’t a genre that is more entertaining. You’ll notice this about romantic comedies, as well.

Madhuri Banerjee’s Advantage Love is her newest book after Losing My Virginity And Other Dumb Ideas and Mistakes Like Love And Sex. Personally, I found Advantage Love flagging in spots and a bit too preachy for my liking – despite an interesting premise.

Trisha Mathur, the novel’s heroine, is an independent-minded woman who believes in making her place in the world on her own talent and merit. The story begins with a debate that Trisha is participating at her college, JNU, against Vedant Kirloskar, the dashing, handsome son of a prominent politician. A meeting later, sparks fly between the two and they start a steady relationship. Though in love with Trisha and extremely dependent on her to make his fledgling political career take wings, Vedant is resistant to the idea of making a deeper commitment and refuses to discuss marriage and a future. The relationship ends on a sour note, with Vedant moving to Mumbai to focus on his political career.

Heartbroken, Trisha immerses herself in her job at the UNICEF and a few months later, happens to meet tennis star Abhimanyu Laxman, who is immediately attracted to her. She doesn’t immediately look to enter into a relationship with him, not wishing to get hurt again. But she rediscovers love with Abhimanyu, and just when her heart is healing, Vedant meets her again.

It’s not a bad plot by any means, but I had a problem with how predictably things happen in the book. You just know Vedant is going to break Trisha’s heart and there are umpteen hints of his imminent return, and the character Vedant is curiously one-dimensional. Besides, he has an annoying tendency to spout poetry when wooing Trisha – if that is what girls really like, then well… *starts learning poetry to use, just in case*. I liked Abhimanyu Laxman loads better, though – he is decent, more open to commitment and wears his stardom with ease and just the right amount of arrogance.

Madhuri displays a tendency to ‘tell, not show’ in her writing; instead of letting the reader understand plot development through dialogue and situation, she writes entire paragraphs blandly describing what the characters are feeling and why they do what they do. What’s more, there is too much sermonising about love and relationships, most of it through Trisha’s friend and mother advising her, and the conversations seem stilted. Personally, I wouldn’t want even my best friend talking to me thus: ‘I don’t want to procreate. And I don’t want to have any regrets. I don’t know if we’ll grow in the same direction over the course of years. No one does. Hell, even railway tracks that are laid parallel straight have to change course or be replaced. We are all continuously changing. But as long as we know that this is the path we want to be on and this is the person we want to share today and the now with, tomorrow and the future will sort itself out. When you say “I love you”, it’s meant as forever. There is no time limit that comes with love.’

Maybe fans of romance novels will love this book, and I’m not suggesting they shouldn’t. Maybe others will enjoy this love triangle more than I did. For me, though, a little less predictability and a lot more twists and turns would have done the trick. I would have liked the girl to love and lose…but then I like an unresolved love story.

‘Advantage Love’ is available for sale on Flipkart.