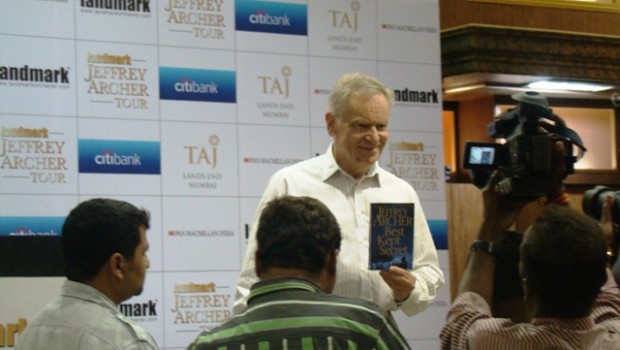 “I’m a storyteller, not a writer…”

Author Jeffrey Archer was at his witty best at the launch of the third book in his Clifton Chronicles series. Instead of five books, the series will have seven!

That Jeffrey Archer is a gifted writer is a given. But that Jeffrey Archer is also a gifted public speaker is a fact one has to be present for to believe. At the launch of the third book – Best Kept Secret – in his Clifton Chronicles series at Andheri’s Landmark book store, Archer was in fine form, taking questions, deftly deflecting uncomfortable ones, deriding the audience when he felt they weren’t paying attention, and explaining what he felt was the crux of the film Lagaan.

In between, he also spoke about the book publishing industry, his Clifton Chronicles series, and in the end, signed copies of his newest book for a really long line of admirers.

Speaking on the importance of brevity, even while keeping the simplicity and beauty of a story intact, Archer said, “It is possible to write a very very short story in 100 words. And if you try it, you can write one in 100 words exactly – not 101, not 99, but 100 words. Write such a story before you write your novel,” he advised, after taking the audience through a 100-word short story he wrote years ago as part of a challenge that the Reader’s Digest had set him years ago. (See video below).

Talking about his newest book, and the Clifton Chronicles in general, Archer said, “The series was supposed to be three books. The first was Only Time Will Tell, the second was The Sins Of The Father, and the third is Best Kept Secret. In the first book, Harry Clifton (the story’s protagonist) was just 19 years old, and by the end of Book 3, he is just 35. To end the series here, I would have to bump him off at 35 years of age, so I decided there would be another book. I am now working on the first draft of Book 4, and by the end of it, Harry will only be 40 years old.

So I decided that there could be a fifth book. But, and this is hot from the Press, it’s probably going to be seven books. I got that one wrong, didn’t I?”

Speaking on the future of the book publishing industry, Archer said, “The e-book revolution is still to hit India. I own a Kindle, but I do feel that there’s quite like having a book to hold. But soon, there may be a time when people will buy e-books and not hard or soft covers. My book Kane And Abel was sold as an e-book for 20p only. The third Clifton Chronicles book will be sold for £8.25, while the hardcover costs £20. Naturally, people are going to go for the cheaper option. Do you understand what is being done? They’re only interested in selling their tablets – they got us to buy the tablet so we would buy e-books! And yet, though Kane And Abel sold for just 20p, as the author I still get £3 royalty per sale, so that’s an interesting dimension. But it’s a worrying development.”

Archer also fielded questions from the audience, and several of his replies evoked loud laughs:

Which of your books would you like to see filmed?

They’re currently filming Paths of Glory, (a story which claims that an Englishman was the first to scale Mount Everest). But since it’s Columbia Pictures and Hollywood, it’s called Everest. (makes face)

If there was ever a film made on your life, who do you think should play you?

(considers) I hear Brad Pitt is already vying for the role. But I would rather have Tom Cruise play me. Let them fight it out.

If you had to play a character from your books on screen, which one would it be?

Harry (from the Clifton Chronicles series).

In Book 3, you’ve based a relationship on incest, which we find really strange in India. What were your thoughts when you were writing about this?

The whole point of a story is that you must read further to know what happens. I knew where I was going with Harry, Emma and Giles. And there’s a bigger problem coming up in Book 4.

Do you think you missed out on a different life because you became a writer? What if politics had worked for you, would you still be in politics?

You know, Proust said, “We all end up doing the thing we are second best at.” Everything went wrong in my life when I was 34. I lost a lot of money and I owed a lot of money. That was when I wrote my first book Not A Penny More, Not A Penny Less. And now you have 16 novels from me, because of one mistake I made so many years ago! But if politics had worked for me, yes I would still be in it.

When are we going to read a Jeffrey Archer cricket story, or have a cricket protagonist in your book?

I wouldn’t be writing a cricket book. Yes, I love cricket with all my heart. But my audience primarily comes from America, and they don’t a clue about cricket! They’re quite stupid, aren’t they? So no, no cricket books from me. But I did watch and enjoy Lagaan, though the dancing was terrible. But watching that film as a storyteller, I thought that the beauty of the story was that there wouldn’t have been a Lagaan if the umpires had cheated.

As far as I’m concerned, 20:20 is rubbish. A test match is VVS Laxman and Rahul Dravid playing the entire day. 20:20 cricket can go to hell.

Did you take formal training to be a writer?

No, I never did. I am well-educated, and my wife is certainly more educated than me. I’ve lived with her for 40 years, so I’ve learnt a lot from her. But I’m a storyteller, not a writer.

How do you know if what you’ve written is good?

You don’t. If you’ll take my advice, you won’t show your writing to these people: your husband, your wife and your lover. They will all lie. If you want to know if your writing’s good, show it to someone who has never met you. You’ll get the truth then.

Have you ever read Indian authors? Who’s your favourite?

I have read Indian authors, yes, and I am going to say this quite carefully. I think you have an author who is far superior to the sacred cows of Indian writing – RK Narayan is the real thing, he’s wonderful. I prefer him to your sacred cows, and I think you know who I am referring to.

They tell me more Indians are writing books than anybody else in the world. But remember, and these are scary numbers: For every 1,000 books sent to publishers, only one is published. For every 10,000 books published, only one makes it to the bestsellers’ lists. And for every 1,000 books on the bestsellers’ lists, only one makes it to #1. The odds are against you, but that must not stop you from going ahead and writing. There are always surprises. (Watch Archer taking questions in the video below)