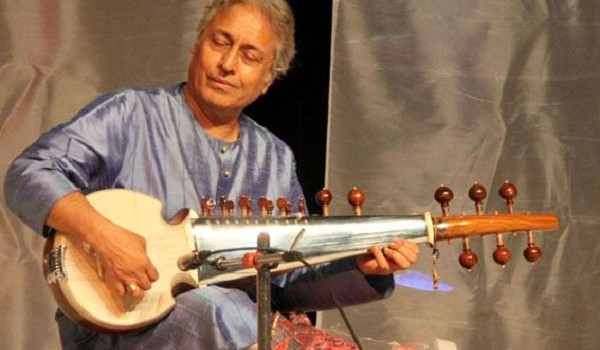 Tonight, sarod exponent Ustad Amjad Ali Khan performs with Vijay Ghate on the tabla, at Nehru Centre. Do not miss.

Today, on the occasion of Mahashivratri, sarod’s most enduring name in India, Ustad Amjad Ali Khan will perform at the Nehru Centre, accompanied by Vijay Ghate on the tabla.

After performing for an august audience at the Nobel Peace Prize ceremony in Oslo recently, the maestro is giving this rare solo performance in Mumbai where he will regale music lovers with traditional ragas and vintage renditions in his inimitable style.

Khan was born into a musical family and has performed internationally since the 1960s. He was awarded India’s second highest civilian honor, the Padma Vibhushan, in 2001. Khan has recently been awarded 21st Rajiv Gandhi National Sadbhavna Award. 20 August is celebrated as harmony day, the birth anniversary of Rajiv Gandhi. Khan received the Padma Shri in 1975, the Padma Bhushan in 1991, and the Padma Vibhushan in 2001, and was awarded the Sangeet Natak Akademi Award for 1989 and the Sangeet Natak Akademi Fellowship for 2011. He was awarded the Fukuoka Asian Culture Prize in 2004. The U.S. state Massachusetts proclaimed 20 April as Amjad Ali Khan Day in 1984. Khan was made an honorary citizen of Houston, Texas, and Nashville, Tennessee, in 1997, and of Tulsa, Oklahoma, in 2007. He received the Banga-Vibhushan in 2011. Sarod maestro Amjad Ali Khan, who has shared his rich experience in Indian classical music in classes across the West, will now teach for a quarter (three months) at Stanford University, this course will have lessons on Sarod as well.